Yunus: In wake of pandemic, we must create a better world 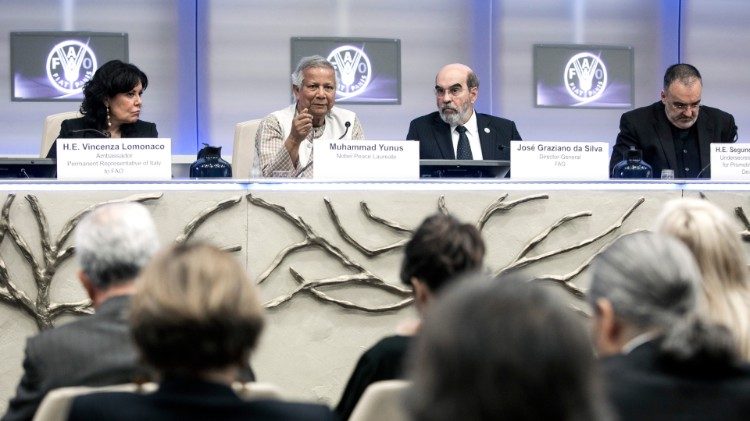 Nobel Peace Prize winner Muhammad Yunus delivers a lecture sponsored by the Pontifical Lateran University, on the global economy after the Covid-19 pandemic.

Nobel Peace Prize laureate Muhammad Yunus on Thursday spoke on the theme “No Going Back. The World Economy after the Covid-19 Pandemic”. The lesson, which was delivered live on YouTube, was sponsored by the Pontifical Lateran University.

Professor Yunus is noted for having founded the Grameen Bank, a microfinance organization and community development bank that offers small loans to the poor. Because of this Bank, Yunus was awarded the Nobel Peace Prize in 2006, especially in recognition of his efforts to develop micro-credit “into an ever more important instrument in the struggle against poverty”, according to the Norwegian Nobel Committee. He is the first Bangladeshi to win a Nobel Prize.

In his lesson, Yunus launched a challenge to the academic and financial world: to rethink and redesign life without going back to the status quo before the pandemic. In his vision, the recovery post-Covid-19 is full of opportunities — but only if we embrace a new social and environmental awareness, a use of the economy not as a mere science, useful for maximising profits, but rather as a tool to achieve the greatest possible happiness of individuals and the community. To do this, Yunus said, it is necessary to put man back at the centre and work together to rebuild tomorrow, looking not to the past but to the future.

No monopoly on drugs and vaccines

Today’s world, Yunus said, has failed in the face of the pandemic: it has not been able to unite in the fight against the common enemy. Instead, it has separated into autonomous and isolated tribes capable of thinking only of their own survival, thus increasing the pain and despair caused by the crisis. To create a new world, he said, strong moral and religious leadership capable of overcoming tribalism, is necessary. It is necessary, too, to break out of our previous way of doing things, and pursure new paths and new directions, employing new means to reach a new end.

The 79-year-old economist, while defending the work of the WHO, deplored the idea of a vaccine conceived as a commodity to generate profit rather than as a common good to save lives. And he called the choices of some pharmaceutical companies, which recently declared they wanted to develop the vaccine and then offer it exclusively to the United States, “depressing”. Here he echoed Pope Francis, as he called for treatments accessible to all, drugs free from any monopoly or patent for any pharmaceutical industry and any nation.

The opportunity of Social Business

His proposal for the recovery, which would also concern the production and distribution of drugs, including a Covid-19 vaccine, is Social Business. Social Business is an economic model that includes the creation of social enterprises capable of working not just for profit, but to solve people’s problems and improve their lives. He explained that it will be the task of governments to create more and more space and promote investment so that these companies can represent a valid alternative, and to maintain their reliability and efficiency. Governments must rethink their role while continuing to care for the poorest among us with assistance programmes for the needy, the unemployed and families. One of their main objectives, however, will be to ensure that we do not go back to older, misguided production models. Yunus reiterates the fundamental importance of life and calls for the path of social justice to safeguard life.

Covid-19, said Prof Yunus, has brought out many problems, but also many opportunities. It has pushed the world, in a sense, to reset, to start over, as the lock down has made it necessary to change our usual way of doing things. This, he said, leads to the question of whether, as we recover from the Covid-19 pandemic, we will rebuild on the same foundations. For instance, already before the pandemic we were faced with the crises of global warming and climate change, massive unemployment, wealth inequality, and artificial intelligence that takes aways work and ingenuity. In the new world Prof Yunus envisions, we have an unprecedented opportunity to find new and creative solutions to these issues.

Pope: ‘May St. John Paul II intercede for peace in the world’