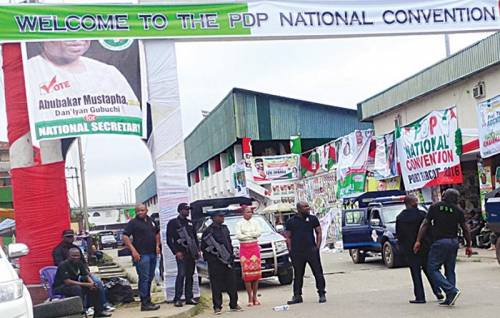 One of the youth groups in the Peoples Democratic Party (PDP), the PDP Concerned Youth Association (PCYA), says it has seen the “looming disgrace” that awaits the party if the presidential primary is allowed to hold in Port Harcourt as planned.

A statement signed by the Coordinator, Emmanuel Willie, and Secretary, Mallam Nura Lawal, on Wednesday noted that their reservations concerning the venue were to ensure that the presidential primary is free and fair.

The statement, according to NAN, alluded to Governor Nyesom Wike of Rivers State having a soft spot for one of the candidates, and urged the party leadership to pick a “neutral” venue instead.

The statement read: “This will not augur well for the party especially now that the PDP is hoping to unseat the All Progressives Congress at the 2019 General Election.

“The distraction coming from Rivers Women Alliance (RIWA), which comprises women from the 23 Local Government Areas of River State demanding a governor from the riverine area in 2019 to succeed Wike, could be a source of distraction to members.

“In this case, the executive arm of the PDP Concerned Youth Association has seen the looming disgrace that awaits the party if the choice of Port Harcourt is allowed to stand, but will not allow that to happen.

“We, therefore, urge the party hierarchy to review the choice of Port Harcourt and choose a venue acceptable to all members to enable the party produce a suitable candidate who can wrestle power from the current APC government.

“We also plead with the national leadership of the party to stand tall and not allow itself to be tossed around by members who are only interested in protecting their selfish interest instead of the party.

“The founding fathers and mentors of our party should ensure that PDP remains one after this convention. We will oppose thuggery in whatever guise.”