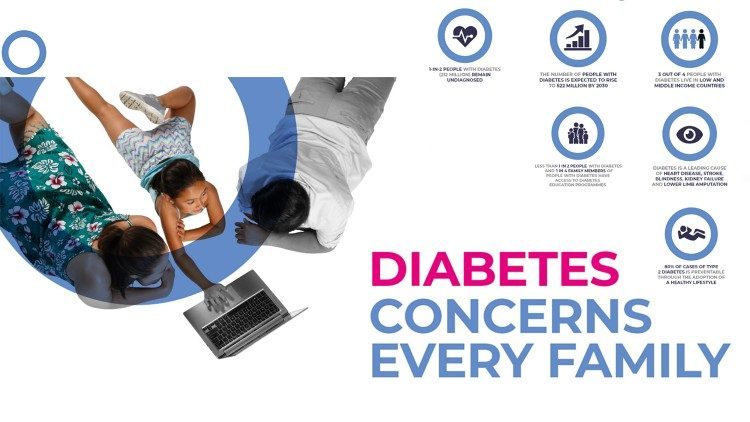 Share
On World Diabetes Day on Wednesday, the United Nations World Health Organization (WHO) is joining partners around the world to highlight the impact that diabetes has on families and the role of family members in supporting prevention, early diagnosis and good management of diabetes.

Established in 1991 by the International Diabetes Federation (IDF) with support from WHO in response to growing concerns about the health and economic threat posed by diabetes, the November 14 World Diabetes Day became an official UN day in 2006.

More than 425 million people are currently living with diabetes worldwide, and the prevalence is predicted to continue rising if current trends prevail. Diabetes is a major cause of premature dying, blindness, kidney failure, heart attack, stroke and lower limb amputation. It was the seventh leading cause of death in 2016.

Globally, an estimated 422 million adults were living with diabetes in 2014, compared to 108 million in 1980. The global prevalence of diabetes has nearly doubled since 1980, rising from 4.7% to 8.5% in the adult population.

This reflects an increase in associated risk factors such as being overweight or obese. Over the past decade, diabetes prevalence has risen faster in low and middle-income countries than in high-income countries.

Most of these cases are type 2 diabetes, which is largely preventable through regular physical activity, a healthy and balanced diet, and the promotion of healthy living environments.

Families have a key role to play in addressing the modifiable risk factors for type 2 diabetes and must be provided with the education, resources and environments to live a healthy lifestyle.

Victim counselor to US Bishops: Children have been betrayed