World Day of the Sick: Card. Bo urges healing of Myanmar with mercy 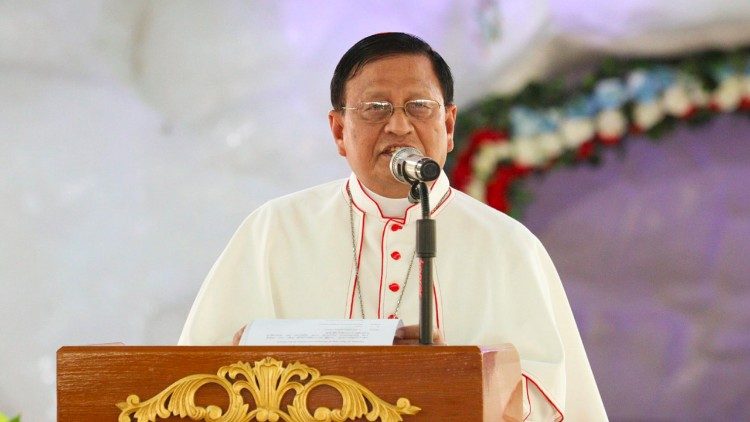 Myanmar’s cardinal marked World Day of the Sick at the national Marian shrine of Nyaunglebin, urging Christians to be merciful and “stewards of good health”.

Myanmar’s prominent Catholic Church leader is exhorting Christians to imitate the sorrowful and merciful Mother saying “the festering wound of hatred need to be healed in this country”.   “Mercy is the message of Christ and Mother Mary,” Cardinal Charles Bo of Yangon said on Friday.  He made the call in his homily at Mass at the national Marian shrine of Nyaunglebin, on the feast of Our Lady of Lourdes, 11 February, when the worldwide Catholic Church marks World Day of the Sick.

“Be merciful, even as your Father is merciful” is the theme that Pope Francis has set for the 30th World Day of the Sick this year, urging Christians to stand “beside those who suffer on a path of charity”.

The people of Myanmar are facing an unprecedented political, human rights and humanitarian crisis, with needs escalating dramatically since the 1 Feb. 2021 military coup amid the Covid-19 pandemic.   The crisis has widened with the military reviving old conflicts with armed rebel and civil resistance groups.  The United Nations estimates that of the country’s 54.8 million population, 14.4 million are in need of assistance, of whom 320,000 are displaced internally.

“Let us teach this nation to heal, not to wound: to throw away weapons of mutual destruction and arm itself with the tools of healing.”

“But this year we have come here as a wounded nation, a wounded people,” said Cardinal Bo, the president of the Catholic Bishops’ Conference of Myanmar (CBCM). “Today once again we come to her protection,” in the face of challenges, tears, the pandemic, displacement and “human brokenness”.

He hopes that the Mother of Sorrows, who grieved with her Son under the Cross and later held His dead body on her lap, may also hold “this nation in her arms and heal all of us”.  “Let her mercy that brought the Saviour in the world, bring once again peace in this land.”

The 73-year old cardinal recalled Pope Francis who prayed more than ten times for the people of Myanmar, “saying that he too knelt in the streets of  Myanmar for healing this wounded nation.”

Recalling the theme of World Day of the Sick, the Archbishop of Yangon said, “More than ever, we need our Mother of Mercy in Myanmar today.”   “Our pain is her pain. Our Lady knows our suffering, our brokenness, our fears and anxieties.” The Mother of Sorrows knows the pain of thousands of “our mothers who lost their sons and daughters to violence,” of those who live under fear and anxiety and of the displaced, as she too was forced to relocate during childbirth and later had to flee to Egypt as a refugee.

Recalling the Gospel episode of the marriage feast of Cana, the cardinal who is also president of the Federation of Asian Bishops’ Conferences (FABC) said, “We are stewards of good health of one another.”  “Let us do as Mary advised: be merciful.”

“There are hundreds of mother Teresas in this country reaching out to those in dangerous places, touching and healing people.”

Speaking of holistic healing, which includes spiritual, psychological and physical, he said, “We need to include all, even those we consider as enemies and evil, we need to include them in our mercy.  “The festering wound of hatred needs to be healed in this country. Mercy is the message of Christ and Mother Mary.”

In this regard, the cardinal particularly appreciated the health workers, the ‘next door’ saints as the Pope calls them.  “Mary comes in the form of our health workers.  They heal by their touching presence.”

He also recalled Mother Teresa of Kolkata who never used gloves in touching the wounded Jesus in treating the sick. “There are hundreds of mother Teresas in this country reaching out to those in  dangerous places, touching and healing people.”

Heeding the call of Pope Francis to transform churches into “houses of Mercey and ‘field hospitals’, Cardinal Bo urged, “Let us teach this nation to heal, not to wound: to throw away weapons of mutual destruction and arm itself with tools of healing.”

Just as in Lourdes, France, and in Velankanni, India, where the Virgin Mary revealed herself as  Our Lady of Health, the cardinal said they have gathered at their own shrine of Nyaunglebin. Just as Mary urged her Son to “change water into wine and bring joy and peace” at the marriage of Cana, Cardinal Bo said, “Today we urge our Lady, heal all of us. Change our tears of sorrow into tears of joy.”

Pope: May Our Lady of Lourdes open our hearts to encounter