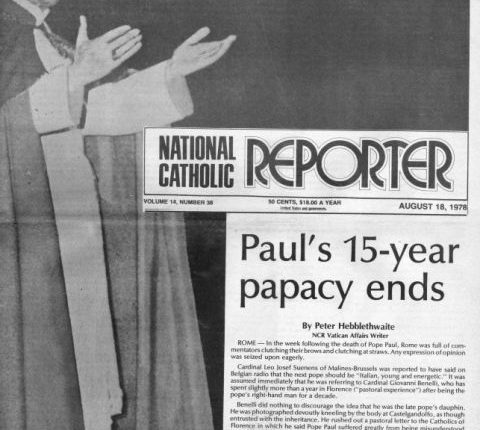 I was delighted when Arthur Jones agreed to write about the pontificate of Paul VI. Jones, a byline our longtime readers will immediately recognize, has held nearly every position available at NCR at one time or another in his four decades with the newspaper. He was the editor at the time of Paul’s death in August 1978, but as he explains in his essay, his early journalism career spanned Paul’s reign.

I asked Jones to write “a reflection or analysis of [Paul’s] place in history from an NCR perspective and from a 50-year perspective.” Jones delivered in spades, of course. To help prepare, he asked me to send him a copy of the 16-page special issue NCR produced to mark Paul’s death. Jones also told me a little story about the making of that issue that I knew I had to share.

In those days, NCR was produced by “phototypesetting.” The typesetting machines used a photographic process (film paper exposed to light and then processed through a chemical bath) to generate long columns of type on scrolls of paper. Once cut into columns, the backs were coated with hot wax and rolled onto card stock the size of a newspaper page. These boards, as they were called, were carried to the printer, who made printing plates from them to produce the newspaper.

Now if you look at that Aug. 18, 1978, issue (NCR Vol. 14, No. 38) you’ll see a rather stark front page. A full body image of Paul is on the left, and he seems to be gazing into an inky blackness covering the top third of the page. Rather artistic, right?

Jones tells another story: Sometime after the boards had passed final inspection and before the plate was made, the headline that should have filled the bank black space dropped off and floated away. The headline should have read, “Pilgrim pope’s final journey.” What everyone assumed was the headline, “Paul’s 15-year papacy ends,” was actually just a subhead from the beginning of the story. “Fortunately,” Jones told me, “it carried it off.”

In preparing our coverage of the canonization of Archbishop Óscar Romero, Gene Palumbo, a longtime friend of NCR and a journalist who has lived in El Salvador since 1980, suggested that I read the poem “Romero of America, Our Shepherd and Martyr” by Bishop Pedro Casaldáliga, now retired from São Félix do Araguaia in Brazil.

In that poem, besides “shepherd” and “martyr,” Casaldáliga calls Romero “the Latin American Passover,” and includes these lines:

Your poor, yes, accompanied you,
in faithful anger,
pasture and flock, at the same time, of your prophetic mission.
The People made you holy.
The hour of your People consecrated you in the appointed time of God.

Palumbo also shared with me an exchange between Casaldáliga and Jesuit Fr. Jon Sobrino, a theologian at Central American University in San Salvador, as recounted by Casaldáliga:

They should never canonize St. Romero of the Americas. That would be an offense to him. He is a saint in a very special way. He has already been canonized. By the people. Nothing more is needed. I said this to Jon Sobrino when I visited Romero’s tomb. I said to him, “Look, Jon, I hope it doesn’t occur to anyone to canonize Romero, because that would amount to saying that the first canonization wasn’t good enough.”

In his book Archbishop Romero: Memories and Reflections, Sobrino recounts a 1985 visit Casaldáliga made to El Salvador and of an evening spent in the Archbishop Romero Chapel at Central American University. Casaldáliga addressed the gathering and Sobrino writes that as the bishop completed his talk and people began to leave,

… a nun stood up and said, “Bishop Casaldáliga, we’ve read your poem about Archbishop Romero so many times. Now we’d like to ask you to read it.” We all rose and [Casaldáliga] recited his poem. The silence, the devotion, and the joy with which every one of us listened convinced me all over again that Archbishop Romero was still good news. “I started to pray again tonight,” a friend told me after the service.

Let’s end this note from me with the last lines of Casaldáliga’s poem. Let it be our prayer.

Synod has a new message for young people