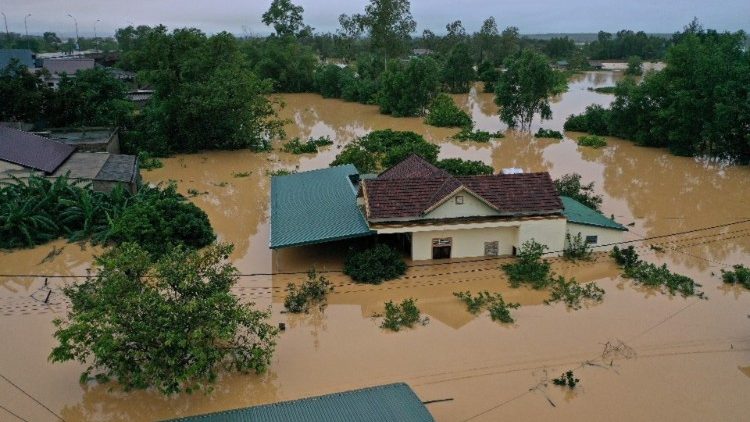 Eleven central provinces of Vietnam have been battered by weeks of intense weather, triggering the worst floods and landslides in years. Typhoon Molave is the fourth storm to hit the area region in October alone.

Two Catholic bishops in central Vietnam, which has been hit by a powerful tropical typhoon and severe floods, have called on the people to help victims.

The powerful Typhoon Molave, which struck Vietnam on Oct. 28, triggered a series of deadly landslides, high winds and devastating flooding, killing nearly 40 people.  Some 45 are injured and 47 missing in the 11 central provinces, the Vietnam Disaster Management Authority said on Oct. 29.   Some 100,000 houses and 200 public facilities collapsed or were damaged and 5,500 hectares of crops have been destroyed.

Bishop Paul Nguyen Thai Hop of Ha Tinh, one of the three worst-hit dioceses, praised people around the globe and local parishes for providing humanitarian aid for tens of thousands of victims regardless of their backgrounds since deadly floods swept the area on Oct. 6.

The 75-year old bishop said emergency relief supplies are necessary but other kinds of aid and sustainable development solutions are also essential for victims to restore their livelihoods soon and avoid natural disasters in the future.

Bishop Hop asked parishes not hit by the floods to hold fundraising events on the Feast of All Saints on Nov. 1.  “The diocese will use the funds to bring victims back to normal life,” he said.

He called on Catholics to extend their relief aid to all victims regardless of their faiths because he said, “they are our brothers and sisters and God’s children”.

The bishop, whose diocese includes the provinces of Ha Tinh and Quang Binh, urged Catholics to study and practice Pope Francis’ encyclical Laudato si’.  He said the encyclical teaches us to “respect, safeguard and care for the environment, our Mother Earth, because only when we do so can we live in harmony and peace with all Creation”.

Bishop Hop blamed massive deforestation, construction of hydropower dams and reservoirs on riverheads and irresponsible discharge of water from dams for the flooding.

He asked people to pray for the flood victims to overcome this hard time, and for God’s blessing on their benefactors.

According to Caritas Ha Tinh, the diocesan charity arm, victims need money to cover their medical needs, build and repair houses, and buy seedlings, breeding stock and tools for their livelihood.

Caritas director, Father John Baptist Nguyen Huy Tuan explained to UCANEWS that their first priority was to provide free medical care to people from 39 parishes hit by the floods.  He said they have been living in polluted floodwater for days.

Caritas said it would need some $50,000 for a healthcare programme that its workers are starting on Oct. 31.  Father Tuan called on all people to make generous donations to the programme.

Meanwhile, Archbishop Nguyen Chi Linh of Hue has also called on people to support efforts to deal with the consequences of the devastating floods. He said people are stranded with their crops and properties washed away by the floods and have no money to erect shelters, cultivate crops, restore livelihoods and meet their children’s school expenses.

The archbishop has formed 6 groups of aid workers to assess the needs of the victims and carry out humanitarian aid properly and fairly.

Brother Joseph Le Van Phuong, provincial superior of La Salle Brothers in Vietnam, said his group has provided material and financial aid to some 1,000 people in the provinces of Quang Tri and Thua Thien Hue.  Among them were some 200 families in Ba Long Commune who were cut off by the flood for three weeks.

Meanwhile, another storm named Goni is gathering strength and slowly approaching the Philippines, packing winds of up to 165 kilometres (103 miles) per hour.  Goni is on course to reach central Vietnam later next week and would be the country’s ninth typhoon this year.

St Peter’s Square: Christmas tree and nativity scene to be inaugurated on 11 December

Cardinal-elect Gregory: a pastor shaped by a “wonderful legacy of faith”

Pope expresses condolences for the death of Cardinal Fernandez