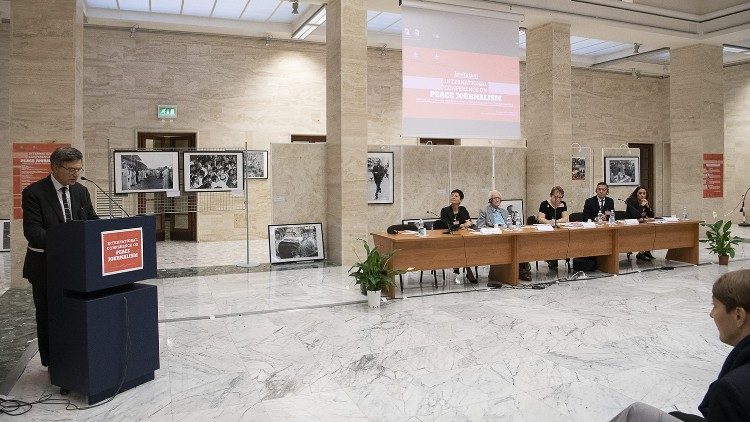 Four peace journalists from Italy, Lebanon, China and Norway spoke on Saturday the 13th of October in an International Conference on “Peace Journalism”, held in and hosted by the Vatican.

Professor Johan Galtung, the creator of the concept, was one of these speakers. He defines Peace Journalism as “editors and reporters making choices – about what to report, and how to report it – that create opportunities for society at large to consider and to value non-violent responses to conflict.”

Galtung highlighted the definition of peace, explaining that there is ‘violence’, – which is self-explanatory; ‘negative peace’, which implies a complete lack of interaction, either peaceful or violent, between two parties; and ‘positive peace’, which means interactions that involve “linking good to good”.

Rey-Sheng Her stressed the importance of ‘constructive journalism’. He explained that journalists must make a concise effort at solving problems and not simply “digging them out”.

Stefania Tanesini spoke of ‘dialogic journalism’. This style, adopted within the focolari movement, describes the “concrete experience of hundreds of journalists”, who hope that their style will strengthen an empathetic and constructive dialogue whilst “constantly searching for peace”.

Vanessa Bassil was the fourth speaker. She is the founder of Media Association for Peace (MAP): the first non-governmental organisation in the Middle East, Northern Africa and Lebanon dedicated to fostering the role of media in building peace.

Peace when surrounded by conflict

She explained to Marine Henriot the need for Peace Journalism in the Middle East, an area of the world which is surrounded by conflict, in which people feel the crisis, “people are desperate, they are hopeless”, she said.

Vanessa believes that promoting a “constructive”, “hopeful” and “inspiring” journalism would bring back hope to the people. It would help them “deal with conflict in a more inspiring way, in a more constructive way”. “And thus”, she concluded, “we will have a society that is more safe, that is more secure and that is more peaceful.”

She also addressed the Syrian refugee crisis. Lebanon, with a population of 4 million, is currently hosting 2 million Syrian refugees fleeing conflict and hardship. “There is a lot of conflict between the host community and the refugees”, she said.

“We have decided to report positive stories about refugees”. By going out and meeting refugees living in camps, her and her colleagues tell “stories that give hope, that give inspiration”.

Vanessa uses the example of a lady they spoke to who fled Syria with her family. She told them about her “story of survival, of strength, of how she was able to do all of this alone.”

Empathy, not only sympathy

This, according to Vanessa Bassil, shows that they are not only “victims” but “independent people, capable of doing and of surviving”. And she chooses to transmit this through “empathy, and not only sympathy.”