US/Mexico migrant crisis: the people and the politics 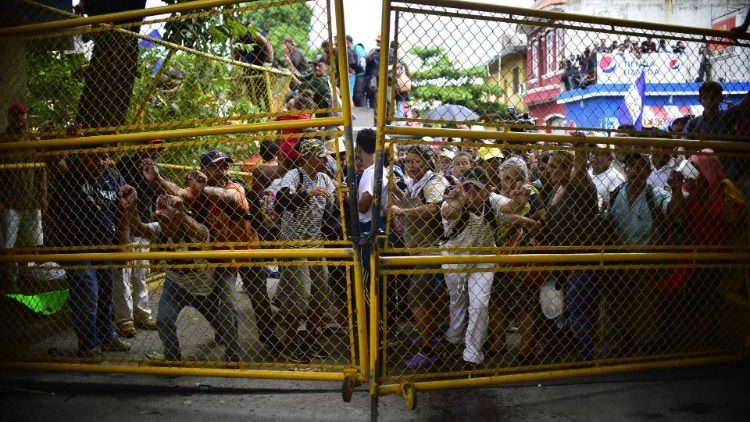 A group made up of 4,000 people from Honduras, Guatemala and El Salvador are journeying together toward Mexico, hoping to be allowed entry into to the US. President Trump has threatened to close the US’s borders, and Mexican authorities have asked the United Nations High Commission on Refugees (UNHCR) to assist. Christine Reis, Esq, Director of the Human Rights Institute at the University of St Thomas in Miami, FL helps us understand what legal help the migrants have a right to expect from Mexico and the US and how the UNHCR can help

“Shutting the border is not an option”, Christine said. “What is required by the US is to assess any individual who is coming to the border requesting asylum or protection.” In order to request asylum, the foreign national arriving at the border of another country must prove that their own country is not protecting them. The receiving country “does have an obligation to at least determine whether the individuals that are coming to the border have a credible fear of being refugees”, Christine emphasized.

When asked about Trump’s threat to close the US border to the caravan of migrants, Christine affirmed that “every country does have the right to control their border”. However, she qualified that this control needs to “be humane, fair, and take into consideration the safety and the lives of the individuals who are asking for our protection”.

Not only is cutting aid to the countries of origin not a solution, it will exacerbate the problem, Christine said.

“A lot of those countries are relying on the aid we provide in an attempt to improve their situation. So, taking aid or cutting aid completely, will actually have a reverse effect and we will end up with more people trying to come in.”

Role of the UNHCR

Christine explained that Mexico has asked the UNHCR to assist at its border with Guatemala. In these cases, the UNHCR sets up shelters and helps determine credible fear on an individual basis. Those “found to have credible fear according to what the Mexican government acknowledges, would then be allowed to enter Mexico, and possibly be given some sort of status there”. The UNHCR can also declare who is a refugee and place them in countries with whom they have agreements. In this case, the US would be asked to receive some, but not all, of the refugees.

Who are among the group?

The original group originated from San Pedro Sula in Honduras and consisted of about 160 people. Christine told us that this city is “one of the most dangerous, most deadly cities in the world”. Along the way other Hondurans, and people from Guatemala and possibly El Salvador joined the original group.

Some of the information regarding the makeup of the group is untrue, Christine went on to say. The fact that this is an election period in the US is also not helping, Christine said

“The information regarding this caravan is being used in order to incite a little bit of fear.  There is nothing that makes us believe that the caravan is full of individuals who are coming in order to commit crime, or are sick, or anything of that nature…. They do know that there are lots of children, and that some of those children may be unaccompanied.