US Bishops on Labor Day: Practice solidarity with the poor 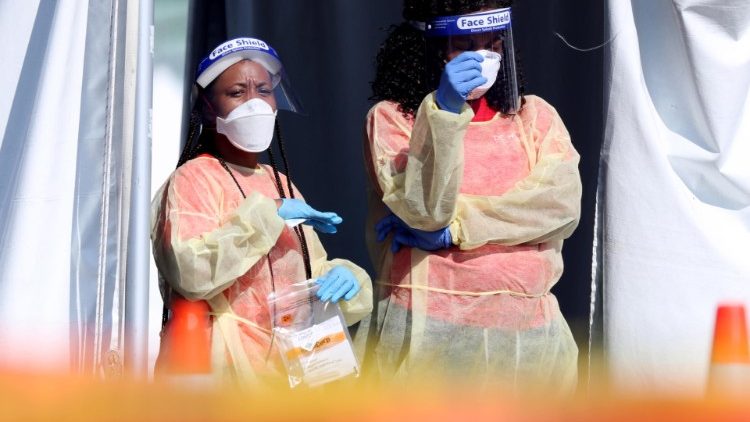 Archbishop Paul Coakley of Oklahoma City, USCCB Chairman on Domestic Justice and Human Development, calls for solidarity, compassion and equality in a statement for Labor Day, and encourages Americans to rebuild a better society after the devastation of the Covid-19 pandemic.

Archbishop Paul Coakley, Chairman of the Committee on Domestic Justice and Human Development of the US Bishops’ Conference, is encouraging solidarity, respect for the dignity of workers, and charity in the annual Labor Day statement, centered on rebuilding a dignified post-pandemic world.

“This Labor Day is a somber one,” Archbishop Coakley said. “The Covid-19 pandemic goes on. Economic circumstances for so many families are stressful or even dire. Anxiety is high. Millions are out of work and wondering how they will pay the bills. And for workers deemed ‘essential’ who continue to work outside the home, there is the heightened danger of exposure to the virus.”

“The dignity of the human person, made in the image and likeness of God is not at the center of our society in the way it should be. In some workplaces, this has meant an emphasis on profits over safety. That is unjust,” said Coakley in the message released on 2 September.

Challenges even before the health crisis

“What was wrong before the pandemic has been accelerated now,” noted Coakley. “Before the pandemic, a significant number of Americans were trapped in low wage jobs, with insecurity around food, housing and health care, and with little opportunity for savings or advancing in their career.”

“Against this backdrop, the murder of George Floyd was like lighting a match in a gas-filled room,” Coakley said, adding that Pope Francis, in his 2013 Apostolic Exhortation Evangelii Gaudium calls for a “thou shalt not” to an economy of exclusion and inequality.

Injustice does not have the last word

Drawing on Pope Francis’s new book “Life After the Pandemic,” Archbishop Coakley expressed hope that “in this wasteland, the Lord is committed to the regeneration of beauty and rebirth of hope…God never abandons his people, He is always close to them, especially when pain becomes more present.” And like the book of Revelation and the prophet Isaiah say, the Lord is “doing something new” (Rev 21:5, Is 43:19).

“The good news is that injustice does not need to have the last word,” affirmed Coakley. “The Lord came to free us from sin, including the sins by which we diminish workers and ourselves.”

A sign of hope is the Catholic Campaign for Human Development (CCHD) which “supports low-income-led efforts to address poverty, create good jobs and be a force of transformation in families and communities.”

During its fifty years of existence, noted Archbishop Coakley, “CCHD has distributed over 8,000 grants worth more than 400 million dollars to help grassroots change.” He said Pope Francis, in his Letter to the Popular Movements in April 2020, highlighted the important role of movements of this sort, as well as unions and workers associations at this moment.

In order to protect the dignity of work and the rights of workers, said Coakley, “we are called to practice solidarity with those in harm’s way.” We can also offer charitable assistance to those unemployed during this time by donating to local food banks and Catholic Charities.

At the same time, “beginning with our own decisions, we might ask when we buy goods from stores or online: do we know where they came from? Do we know whether the people who made them were treated with dignity and respect? Was the workplace made safe during the pandemic, and did workers received a just wage? If not, what can we do to remedy this?”

Policymakers, too, must address the people’s needs of nutrition, healthcare, income support and jobs, said Coakley, explaining that some of the relief measures are expiring and the government needs to prioritize protecting the vulnerable and the poor.

Pointing out that “the fruits of individualism are clear in the disparities brought to light by the crisis,” Archbishop Coakley encouraged all to be counter-witnesses to individualism through solidarity, especially as “no one can save themselves alone” (Lumen Gentium no 9).

“Let us pray for the grace to participate in God’s work in healing what is so deeply wounded in our society,” urged Coakley. “Let our response to the Psalm at Mass this Labor Day echo in deed and truth: ‘Lead me in your justice, Lord’” (Ps 5:9).

Every year, Labor Day is celebrated in the United States as a federal holiday on the first Monday of September in honor of labor movements and in recognition of the social and economic contributions of laborers to the development of the country.

Pope at Angelus: Gossip ‘a plague more awful than Covid-19’

CELAM, Creation: “Let us pray for personal and social conversion

Bishops’ Conference takes up collection for needs of Church…