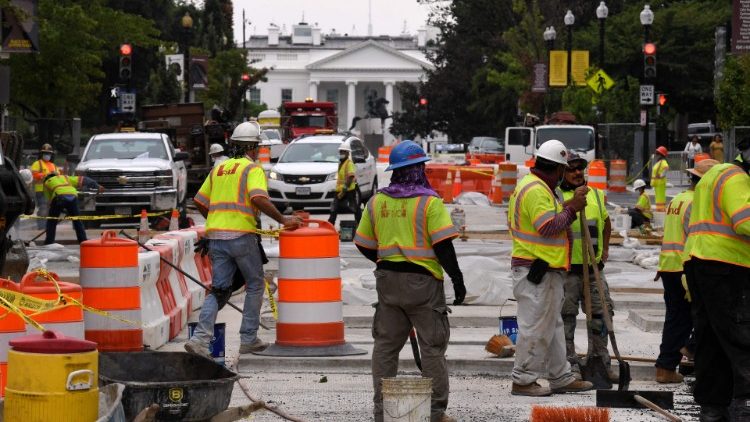 Chairman of the US Bishops’ Domestic Justice and Human Development Committee, Archbishop Paul Coakley, urges common efforts in order to re-emerge from the Covid-19 crisis “with an economy that works for all of God’s children” in this year’s Labor Day message.

“Brothers and sisters, a year and a half after the country started shutting down due to Covid-19, we see signs of both encouraging recovery as well as ongoing trials. There are still many uncertainties around this pandemic; however, we do know that our society and our world will never be the same.”

Thus, Archbishop Paul Coakley of Oklahoma City and Chairman of the US Bishops’ Committee on Domestic Justice and Human Development, began his statement for Labor Day, celebrated annually in the United States on the first Monday in September. This year, the observance falls on 6 September.

Drawing inspiration from Pope Francis’ latest Fratelli tutti encyclical, and from the Economy of Francesco initiative, he reflected on the signs of the times and how can “we apply what the Holy Father is offering to inspire us towards a better economy.”

Recovery in spite of difficulties

As economies pick up from the devastation of the Covid-19 pandemic, the Archbishop notes, “Recent reports of increases in personal income and spending give us hope that the economy is recovering in meaningful ways.”

Compared to the period between March 2020 and February 2021 when 47 percent of adults experienced employment income loss, the unemployment rate is considerably lower, he pointed out.

However, the rate remains higher than it was prior to the Covid-19 pandemic, as nearly 40% of Americans would have had difficulty covering an unexpected $400 expense, even before the pandemic.

Archbishop Coakley also seized the opportunity to pray for those who have lost their sources of income during the pandemic, and to thank the many workers “who have kept the country functioning” during these trying times, working under difficult and underappreciated conditions.

Archbishop Coakley then highlighted some of the vulnerabilities further exacerbated by Covid-19. He noted that the national human trafficking hotline “handled a 40% increase in emergency trafficking cases in the month after shelter-in-place orders,” with communities of color particularly vulnerable to human trafficking.

All of this happened, he notes, in a context where the country is grieving the more than 600,000 people who died due to Covid-19. The health emergency has also left up to 43,000 children without a parent and many families who have lost a breadwinner have become more financially vulnerable, with “a projected 42 million people in the United States experiencing food insecurity this year, including 13 million children.”

The Archbishop recalls Pope Francis’ vision in Fratelli tutti for a post-Covid world that “aspires to a global fraternity which leaves no one at the margins of society.” The Pope decried racism, discrimination based on gender, and a “throwaway culture” that treats the poor, disabled, unborn, or elderly as dispensable.

He notes that the Holy Father invites all to dream “as a single human family, as fellow travelers sharing the same flesh, as children of the same earth which is our common home.”

To achieve such universal fraternity, Pope Francis insists that “social and economic systems stop producing victims.” In this regard, efforts should be made to reanimate the economy “with a new economic model based on fraternity and equality.”

“It is our task not only to reflect on the present ills of our economy, but also to build consensus around human dignity and the common good, the bedrocks of Catholic social teaching, and to answer the Pope’s call to propose new and creative economic responses to human need, both locally and globally,” the Archbishop says.

The Church is not left out in efforts for a better society. Archbishop Coakley acknowledges the work of Catholic parishes and ministries during the crisis to bring about the Pope’s vision and to make the places where the Church is present “islands of mercy in the midst of the sea of indifference.”

For example, in the first six months of the pandemic, Catholic Charities agencies “distributed nearly $400 million in emergency assistance including food, personal protective equipment, baby supplies and quarantine housing for the homeless.” More so, the local Churches also created several initiatives to help during the health emergency.

In addition, bishops have advocated in favor of “nutrition programs an eviction moratorium, income and employment support, safety measures for those who are incarcerated, and access to health care.”

Reflecting on Sunday’s readings, Archbishop Coakley points out that St. James, “tells us that we become judges with evil designs when we remain distant from the poor” (James 2: 1-5). Along the same lines, Pope Francis has also observed that, “we sometimes justify our indifference for the poor by looking the other way and living our lives as if they simply do not exist,” he noted.

“Not only are our actions insufficient, but our sight as well, when we ignore the poor and do not allow their pleas to touch our hearts,” Archbishop Coakley emphasized.

To remedy this, he called on everyone to accept “together the challenge of reemerging from this crisis with an economy that works for all of God’s children” and to pray for those who have died, their loved ones, those who are ill, those who have lost their jobs, and for an end to this crisis.”

Finally, he urged all to engage in building “a better kind of politics by entering into dialogue with elected officials, calling them to an authentic politics that is rooted in the dignity of the human person and promotes the common good.”

“The pandemic has universally presented us with many shared experiences,” Archbishop Coakley said. “May we build on this moment with a global fraternity that transcends partisanship and eradicates injustices in all its forms.”

Church in Canada prays for healing and reconciliation with First Nations

Church in Canada prays for healing and reconciliation with…

Archidiocese of Milwaukee prays for victims of tragic…