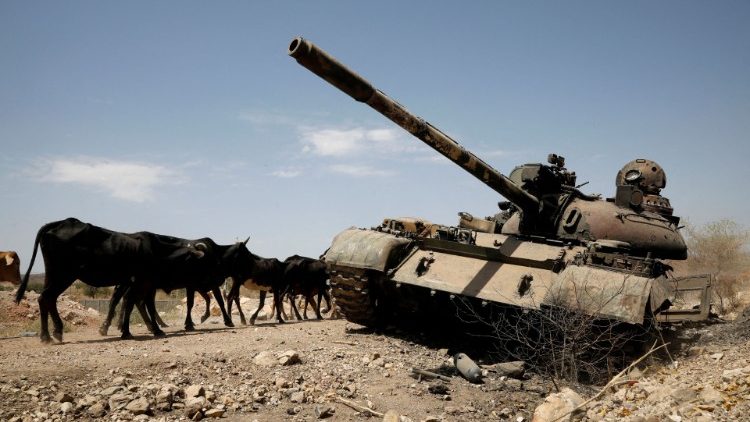 A report on the situation of human rights in Eritrea presented to the UN Human Rights Council highlights the application of force in gathering recruits for military service in the country.

The special rapporteur on the situation of human rights in Eritrea, Mohamed Abdesalam Babiker, has put the spotlight on reports of forced recruitment of people, including children, by Eritrea to fight in the ongoing conflict in the northern Tigrayan region of Ethiopia

In a report titled “Situation of human rights in Eritrea”, presented to the 50th session of the United Nations Human Rights Council which is taking place in Geneva from 13 June – 8 July, Babiker highlighted the continuing involvement of Eritrea in the war in Ethiopia which has important implications for the internal human rights situation in the country.

The rapporteur’s report explored several aspects, ranging from the national/military service, access to justice and the rule of law, civil and political rights/fundamental freedoms and the impacts of the conflict in Tigray on the human rights situation in Eritrea, among others

The report identified some worrying trends in Eritrea, noting the increased militarization of the country and the use of military conscription raids or “giffa” to enlist people to go to the front lines.

The rapporteur pointed out that the government of Eritrea states that the national service program has a duration of 18 months but since 1998, authorities have created a permanent state of general mobilization, extending the statutory period indefinitely, justifying the high level of militarization of the country with the “no war, no peace” situation with Ethiopia.

Babiker noted that since November 2020, conscripts have “been forced to fight in a gruesome war in the Tigray Region of Ethiopia” alongside Ethiopian National Defence Forces and allied militias, but the families of those forced to fight have not received information about their whereabouts.

More so, while only men and women over the age of 18 have the duty to serve in the national service, the rapporteur “observed a worsening in previously documented patterns of forced conscription of children” with reports of the rounding up of children, some as young as 14 years old. Some children were also deployed for military combat in Tigray with limited training, and according to reports received by the rapporteur, “a large number of children were allegedly injured or killed during the early stages of the conflict, and dozens sustained grave injuries causing disabilities.”

Furthermore, “draft evaders and deserters are routinely punished with arbitrary detention in highly punitive conditions, and often subjected to torture and inhuman or degrading treatment.”

Babiker also pointed to the situation of Eritrean refugees in Ethiopia, saying that many fleeing the dismal human rights situation in their country are “forcefully returned, detained, punished and forcibly conscripted by the same military forces they had fled from in Eritrea.”

The rapporteur notes that many of the refugees in Tigray are unaccounted for, even as reports of escalation of violence, extrajudicial killings and kidnapping continue to pour in, and many are caught up “between warring groups in the Tigray and Afar regions and displaced predominantly to the Amhara region.”

The rapporteur stressed that “returns made using deception or under duress or through actual or implied threats of violence and ill-treatment cannot be considered “voluntary” and therefore constitute refoulement.”

In light of these, the report proposed, among other things, that the Government of Eritrea investigate the recruitment of children by the country’s armed forces to fight in Tigray, and “take the necessary steps to prevent the conscription and deployment of child soldiers.”

Furthermore, the rapporteur recommended an investigation into abductions and forced returns of Eritrean refugees and asylum seekers into Eritrea and their subsequent military subscription, as well as an investigation into the allegations of human rights and humanitarian law violations in Ethiopia.

The rapporteur also called for the immediate withdrawal of Eritrean forces from Ethiopia, and abstention from obstructing the access of humanitarian personnel, food and supplies to the country.

But for the grace of God, there go I