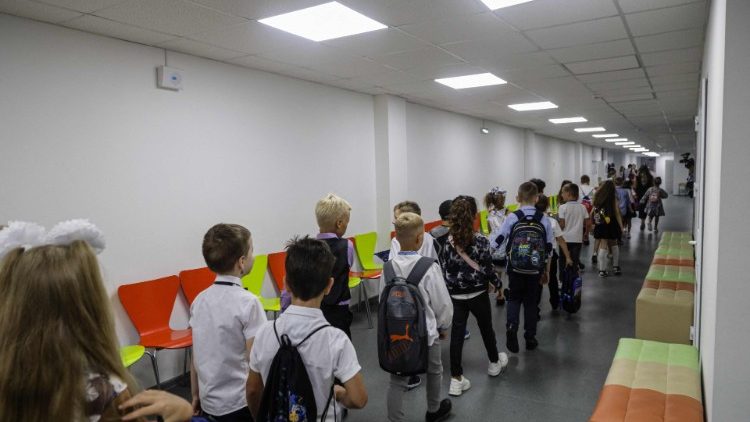 Inna Sovsun, a member of Ukraine’s parliament, speaks about her country’s education crisis on the sidelines of an international conference on educating refugees, hosted in Rome at the Pontifical Gregorian University.

The degradation of education and a ‘brain drain’ are the latest tragedies in Ukraine, as the country continues to be battered by war as Russia’s invasion continues. However, these issues can be mitigated if forces join together to guarantee safety and adequate bomb shelters in the war-torn country.

This was the message expressed by a member of the Ukrainian Parliament and Former First Deputy Minister of Education and Science, Inna Sovsun, in an interview with Vatican News’ Svitlana Dukhovych.

During the phone interview with the parliamentarian, one could hear the air raid sirens.

“Education in Ukraine has suffered because of the direct damage to the buildings. But what is even more important, it has suffered a lot because of the ‘brain drain’ of kids leaving the country and potentially not coming back, and because of teachers and university professors are leaving and finding jobs abroad.”

Ms. Soivsun believes “it is crucially important right now to join forces to make sure that all those kids, all those students, all those teachers, professors, come back.”

In order for that to happen, she insisted, the basic requirement is safety for those who are in schools, colleges and universities.

“My primary direct message, even a request, if I may, to our international audience would be this: please help Ukraine build shelters, bomb shelters, in our schools.”

The former education minister admitted that this is “a huge undertaking,” too immense for the Ukrainian economy to support.

“We have 13,000 schools, and only half of them have some very basic shelters as of right now,” she lamented.

“This is a very primary and basic requirement,” she said, “if we wish to help Ukrainian education to overcome this extremely difficult period.”

In Ukraine, the local governments of the territories on the frontlines have decided to not open schools, and to keep all learning remote.

In other areas far from the frontlines, such as in Kyiv, the regions can decide whether or not to open educational institutions.

The condition, however, is that the schools have bomb shelters. A commissioner comes to check the schools.

Risk of sending children to school

The former education minister told Vatican News that she prefers to send her son to school despite a risk, because, to some extent, doing so is a little safer, because the teachers will bring the students down into the bomb shelter, something that wouldn’t be happening if he were studying from home, or if she and her son were at their home together.

In addition, she observed that he is now in fourth-grade, and thus far, largely due to the Covid-19 pandemic, he has never been able to have a normal school experience.

“But my heart just breaks up thinking of kids, thousands of kids all over the country who, hearing this air raid siren, have to go to cold, damp, basically basements, which are not in very good condition, and most likely don’t have very basic things, like toilets.”

This, she said, is something we need to fix all together, “in order to have less children refugees, in order for the Ukrainian children to come back.”

“I want our kids to get an education that will help them rebuild Ukraine, make it stronger, make it better,” said Ms. Sovsun. “That is why proper education is key.”

The conference held at the Gregorian University seeks to examine the need and means to educate refugees and internally-displaced people (IDPs). It has brought together an international panel of university administrators, faculty, and education practitioners, as well as leaders of NGO’s, international agencies, and humanitarian organizations.

The encounter was organized by the Refugee & Migrant Education Network (RME), Being the Blessing Foundation, and the Faculty of Social Sciences of the Pontifical Gregorian University.

The conference was designed to leave plenty of room for networking and collaboration to explore initiatives, opportunities and ideas for collaboration, and to find strategies to respond to today’s crises.

A primary focus has been given to the Ukrianian Refugee education crisis, but many other topics are being explored. Participants will have a private audience with Pope Francis on 29 September.