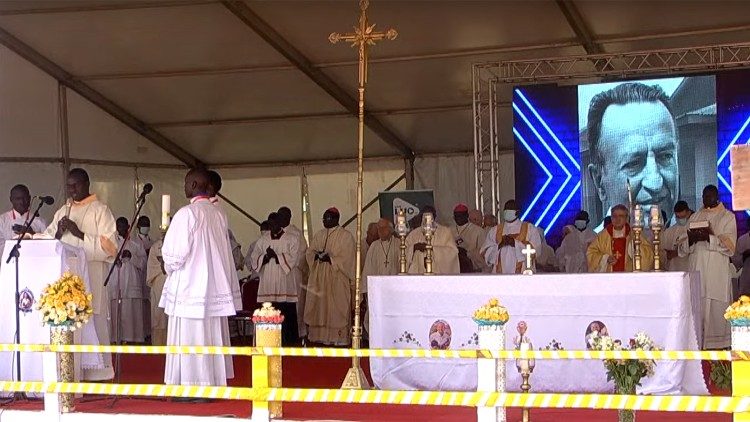 The new Blessed of the Church, Fr Joseph Ambrosoli, was beatified Sunday at a colourful ceremony in Uganda’s Archdiocese of Gulu. The Apostolic Nuncio to Uganda presided over the ceremony, also attended by the country’s Republican President.

Ugandan media on Monday were filled with radiant stories of the newly beatified Joseph Ambrosoli’s beatification and recollections of his work and inspiring life.

A healer of body and soul

“He healed the wounds of body and soul,” Archbishop Luigi Bianco, the Apostolic Nuncio, said. He continued, “We are invited to consider emulating Blessed Joseph Ambrosoli’s faith, hope, charity, humility, goodness, patience, generosity, spirit of service, sense of duty, and availability,” he added.

Solemnity of Christ the King

Reporting on the Apostolic Nuncio’s homily in Uganda, Vatican News Italian language’s Fausta Speranza said the Nuncio made explicit reference to the Sunday’s feast of the Solemnity of Christ the King. Archbishop Bianco recalled the meaning of the Kingship of Christ, who gave his life out of love and did not seek power. “His Kingdom,” said the Nuncio, “is different from that of the world because God does not reign to increase his power and crush others. He does not reign with armies and force.” All of these, Archbishop Bianco said, inspired the choices of Father Joseph Ambrosoli. He made his medical knowledge available to an impoverished territory at the time without neglecting the person as a whole.

Speaking ahead of the beatification, Gulu’s Archbishop John Baptist Odama told Angella Rwezaula of Vatican News’ KiSwahili Service that the Archdiocese of Gulu feels very blessed to have yet another Blessed in its midst. The Archdiocese already has Blessed Jildo Irwa and Daudi Okello. The two are the blessed martyrs of Gulu.

Father Giuseppe Ambrosoli is best remembered as a beloved priest, surgeon, philanthropist, and educator in the missions of Uganda. He was fondly referred to by Ugandans as the ‘good doctor’ or the ‘saintly doctor.’ To this day, people speak fondly about his unique compassion and kindness in caring for patients, reminisced Archbishop Odama.

Father Joseph Ambrosoli’s beatification took place at the Catholic Parish of Kalongo, where he lived and worked. “It is about 130 Km from the city of Gulu,” said Archbishop Odama. He added, “This man lived a very simple life. We could say his heart was closely related to that of God. He handled people with God’s love, and one of his famous statements was, ‘God is love, and I am his servant to the suffering people.’ It is actually more than just a statement. It is a compelling message. Besides, Fr Ambrosoli often prayed, ‘God free me from myself so that I can love everyone, including those who are not loved by anyone. Let me love them all,’ “testified Archbishop Odama.

We are all called to sainthood

Archbishop Odama continued, “As a doctor, Fr Ambrosoli served everybody. People always felt the presence of God through him. He was a great man of prayer, charity, self-giving, and humility. He was one imbued with that universal perspective of life. All I can say is that this man shows that all of us are called to sainthood,” explained the Archbishop of Gulu.

Acclaimed a saint by the people

Ambrosoli was born in 1923 in the Province of Como, Italy. He arrived in Uganda in February 1956. While in Gulu, he eventually relocated to Kalongo and founded the Kalongo Hospital. This facility gained a reputation for excellence. For almost 31 years, until 1987, when he died, Fr Ambrosoli cared for Uganda’s sick.

“After he died in 1987, people felt that this man must have been a holy person. So, I took the courage to constitute a small committee to see how we could start the process of beatification … The Prefect of the Dicastery for the Causes of Saints in the Vatican encouraged us to tell people to pray so that we could have some favours through the intercession of Fr Ambrosoli. About two years ago, a miracle happened in the hospital. A lady with a malignant tumour got healed through the intercession of Fr Ambrosoli,” said the Archbishop Gulu.

Emulate the values of Blessed Ambrosoli

The beatification was, in fact, initially scheduled for 22 November 2020 but was postponed due to the Covid pandemic.

Fr. Achilles Kiwanuka Kasozi, Provincial Superior of the Comboni Missionaries in Uganda, has urged the people to focus more on Fr Ambrosoli’s love for the poor and sick. He has since invited Christians to emulate the values lived by Blessed Ambrosoli.

COP27, Guterres: There is still no answer to the climate crisis