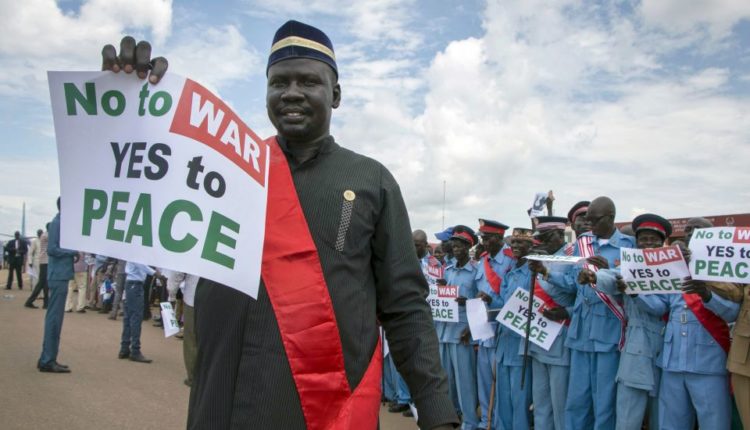 The two leaders signed an agreement in mid-September, hoping to end years of conflict.

“I want to rebuke the spirits of confusion in our leaders,” Chol prayed, amid cheers of “Amen” from hundreds of worshippers. “We thank God and pray that he touches the hearts of our leaders so that they can embrace the new peace agreement.”

During his sermon, Chol urged his congregants to have faith and hope and continue to pray for a sustainable peace. He said they should refuse to be divided by political leaders along ethnic lines.

“We are all children of God,” said Chol, 55, a father of three. “We should treat each other with the love of Jesus Christ. Please don’t do anything wrong because your leader has told you. Follow what the Bible says and you will be blessed.”

Chol and his congregants are among thousands of Southern Sudanese gathering in churches and various mosques across major cities and refugee camps to pray for their country, which has been embroiled in civil war since 2013.

South Sudan erupted into civil war after a power struggle ensued between Kiir and Machar. The conflict spread along ethnic lines, killing tens of thousands of people and displacing millions of others internally and outside the border. The economy has collapsed as a result of the ongoing war. Half of the remaining population of 12 million faces food shortages.

The latest treaty is the second attempt for this young nation to find peace. South Sudan became officially independent from Sudan in 2011. In 2013, civil war broke out after Kiir fired Machar as his deputy, leading to clashes between supporters of the two leaders.

A previous peace deal in 2016 tried to bring warring sides together so they could find a permanent solution. But fighting broke out in the capital city of Juba a few months later when Machar had returned from exile to become Kiir’s vice president as outlined in the peace agreement.

Under the new power-sharing arrangement Machar will once again be Kiir’s vice president.

Religious leaders such as Chol are optimistic that the latest peace agreement will hold up. They believe it is an answered prayer for thousands of faithful.

“I have hope in the new peace agreement,” said Bishop Emmanuel Murye of Episcopal Church in South Sudan. “We have been praying for peace to return to the country and we are happy that our leaders are committed to bring peace.”

Murye has been holding evangelistic meetings in refugee camps in Uganda, where more than 1 million South Sudanese have taken refuge. He said people in the camps have been praying for leaders to embrace the new deal.

“People want to come back home,” he said. “They are tired of staying in the camp. Life in the camp is not easy because there is no food to eat and children are not going to school. They have been praying for peace and they believe this is an answered prayer.”

But others still doubt the new peace deal.

Fighting broke out in the country, killing 18 civilians, two days after the warring sides signed the latest agreement to end the civil war. Kiir and Machar supporters blamed each other for the attacks.

Religion has played a major role in South Sudan’s conflicts.

According to a recent report by Pew Research Center, Christians make up about 60 percent of the population of South Sudan, followed by 33 percent who are followers of African traditional religions. Six percent are Muslim.

The war for South Sudanese independence was often framed in religious terms — pitting Christians and followers of traditional religions against the Muslim leaders of Sudan.

Achol Garang, a catechist at the Bidi Bidi refugee camp in northern Uganda, said God was punishing her country for its sins. She said political leaders in South Sudan used religion as a tool to fight for independence from Sudan.

“They called themselves Christian liberators when they were fighting and promised to take us to the promised land of self-government,” said Garang, 45, a mother of five who fled Yei town in southwest South Sudan in 2015. “They lied to God and that’s the reason we are suffering now. We should just continue to pray for forgiveness of sins. We will get the answer one day.”

The South Sudanese government has accused church leaders of promoting violence among congregants by dividing them along ethnic lines.

The East Africa nation has two major tribes that have been involved in the civil war. People from Dinka tribe are loyal to Kiir, while people from Nuer tribe are led by Machar.

Religious leaders agree there has been ethnic conflict. But they say the church still remains strong.

“While individual clergy may have their own political sympathies, and while pastors on the ground continue to empathize with their local flock, the churches as bodies have remained united in calling and for an end to the killing, a peaceful resolution through dialogue, peace and reconciliation — in some cases at great personal risk,” John Ashworth, who has advised Catholic bishops and other church leaders in South Sudan, told Inter Press Service in Juba.

“We must have faith that we have already found peace,” he said. “God has promised that he will never abandon his children, and we are happy he has answered our prayers.”