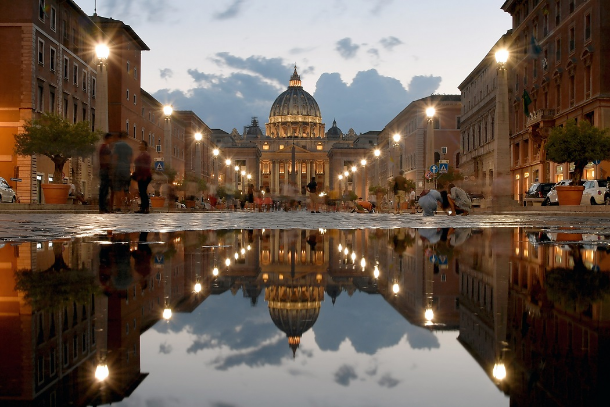 In the early centuries of the church’s life, there were three so-called “mortal” sins: adultery, murder and apostasy. All three were sins against the life and unity of the community. They resulted in excommunication, separation from the community, until a penitential restoration of communion.By the time, many centuries later, when I was learning the catechism, it seemed as if every transgression were mortal, and therefore cause for damnation, unless there were extenuating circumstances.One of those mortal sins was violation of the church’s rule of abstinence from meat on Fridays. In order to make a living, the hot dog vendor in my mostly Catholic neighborhood sold “Friday hot dogs” at a discounted price — buns with condiments, but no sausages in them. That ended in 1966, when Pope Paul VI loosened the restrictions.I recall seeing a cartoon at that time that showed two devils in hell. One was asking the other, “What are we supposed to do with all the people who are here for eating meat on Friday?”That devil comes to mind as I think of the upcoming canonization of Pope Paul VI. That devil’s concern was one that Paul shared. “If we change things, what will that mean for what we’ve said before and those who believed us?

Pope Paul VI rightly deserves to be remembered with veneration as the pope who carried forward the work of the ecumenical council convened by Pope John XXIII, Vatican II. Paul brought the council to its close and began the post-conciliar adaptation of the church to its new reality.However, Pope Paul is probably most remembered for his 1968 encyclical Humanae Vitae that barred the use of “artificial” methods of controlling birth. In his encyclical, he went against the recommendations of the commission of experts he had convened to advise him on the issue. Among those who encouraged him in this was the Polish bishop who later became Pope John Paul II.Paul’s reason for not changing the long-held teaching that various forms of contraception are sinful was concern for the image of the church. His was the cartoon devil’s concern: “If we change things, what will that mean for what we’ve said before and those who believed us?”The pope felt that a change in the traditional discipline would undermine the trust people had in the magisterium, the teaching authority of the church. And in his mind, that would be the same as undermining trust in the church.As he soon learned, Pope Paul’s move backfired. People relied upon biological and social scientific facts and their own experience more than upon a papal say-so to justify ignoring his encyclical. The pope’s mistake was to over-identify the church with its teaching authority rather than with the People of God and Christ.The result was a textbook example of the law of unintended consequences. Instead of confirming the authority of the centralized magisterium, Humanae Vitae initiated a period of questioning, defiance and, ultimately, marginalization of church authority. We are in the midst of that period. Ironically, the very situation that Pope Paul hoped to head off became the major result of his action.After Pope Paul was gone, the response of Pope John Paul II to the erosion of respect for centralized Roman authority was to fight back by appointing bishops who would make loyalty to Humanae Vitae and the magisterium the hallmark of their ministry.Once again, however, the law of unintended consequences went into effect and has provoked what is considered by many to be the worst crisis in the Western church since the Reformation that began half a millennium ago, the cover-up of sexual abuse by clergy.Those “John Paul bishops” were so focused upon Rome and the magisterium that they failed to see the victims in front of them. Rather, they engaged in cover-ups in order to protect the image, authority (and finances) of the church from further disrespect and attacks.The only way out of this mess is to admit that Catholicism is not basically about popes and bishops, rules and teachings. It is about Jesus Christ, the love of God incarnate in a human being. And the church itself is not an institution, but the People of God. Like all people, we use institutions to regulate our lives, but the institution is not our definition. Then, we have to live personally and communally as if we really believed that is who we are.That will not magically heal the unintended consequences of leaders’ actions in the past. It will take decades, maybe centuries, to undo the harm that well-intentioned men have inflicted upon the church.I wonder if John Paul’s refusal to recognize and deal with the abuse situation has angels asking one another what they should do with St. John Paul now that we know how much responsibility he bears for the mess we are in.