‘The ecological revolution will be spiritual’ 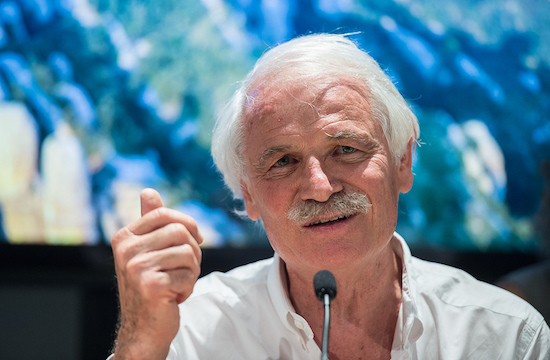 Yann Arthus-Bertrand is a committed photographer, journalist and documentary maker. He welcomes Laudato si’ as a “revolutionary” text.

“It’s a revolution that is done by recalling ethical, moral values, by practicing humanism,” he told Loup Besmond de Senneville in an interview.

Loup Besmond de Senneville: What made you decide to preface and illustrate Laudato si’, the encyclical by Pope Francis, in this new edition to be published on Nov. 14?

Yann Arthus-Bertrand: This project was conceived in Brazzaville, in the Republic of Congo, where I met leaders of a Catholic endowment fund that owns Editions Première Partie.

At the time, I was looking for a way to finance an orphanage that I support, and that’s how I proposed to illustrate Pope Francis’ text and contribute the rights for this book to the orphanage.

It’s an incredible encyclical, magnificent, with a revolutionary tone. I’m thinking, for example, of what he wrote on the ecology, war or capitalism: it’s really an otherworldly text that has had an incredible impact on ecological milieus.

He did not pull any punches. On the other hand, I’m sorry it’s not easier to read.

It’s great that the pope is able to tell us that capitalism is destroying the planet. I’m convinced that ecology needs to be more humanistic today, and that’s why this text is so very powerful.

As a matter of fact, all the ecologists know it. As an activist, I see it as my role to help and push everything that’s going in the right direction.

Unfortunately, today we are seeing a type of resignation whereas the world is collapsing. However, spirituality can help us to become aware, once more, of what we are witnessing. Unfortunately, that’s not really the case with politics.

Do you no longer believe in politics?

They are neither more intelligent nor more courageous than we are. They are a bit lost.

Hulot’s resignation is a bit of a sign of this state of mind. He had an incredible post. He had Macron’s ear. He should not have stepped down, but perhaps he’d had enough.

I’m sorry about that because he’s the best among us: he has real political charisma, knows the issues perfectly, speaks very well, is very moving… He has all the qualities. I, for one, would not have been able to do it.

What role should spirituality play in the ecological field?

I think our world is a prisoner of what I would define as a sort of growth religion.

It’s this religion that guarantees our comfort, our health, our education, our being the sixth wealthiest country in the world; but this growth, which is the absolute dream of all the world’s countries, is destroying life on Earth.

One has the impression that this will never stop. What do we need to get us out of it? The revolution will not be scientific.

We’re not going to replace the 95 million barrels of oil the world consumes every year. It will not be economic either, since the economy wants only growth, which becomes the absolute Holy Grail for all Heads of State.

I see only one possible way out: the spiritual revolution.

What do you mean by ‘spiritual revolution’?

It’s a revolution that is done by recalling ethical, moral values, by practising humanism.

What can I do to make things go in the right direction? No-one forces me to put gas in my car or eat meat. It is that type of reflection, deep reflection, that we need to have.

Throughout our lives, we are encouraged ceaselessly to buy. As former Uruguayan President Jose Mujica said: All our lives, we work to buy but, at the end of our life, we cannot buy it back.

That’s similar to what Pierre Rabhi says about the need for frugality. This path is supported by great spiritual figures, including the pope.

Today, we see that there is a renewal of religions, because we’re a bit lost in this materialistic world. We need basic values that are supported by Christianity.

Do you define yourself as someone imbued with spirituality?

I cannot really say that I define myself as a spiritual person; but I’m seeking after it. I have begun meditation.

You cannot down arms down and look on at what’s happening. I do not believe in God, but I am very attached to the values of Christianity.

Empathy, generosity, compassion seem essential to me, and it is they that will help us to tolerate what is happening.

I was born into a very religious family, but I quickly rejected all of that and, at the same time, for years now, I have been coming across great people of religion, like all the good nuns that do humanitarian work.

I am thinking in particular about a nun I met when I was 35 years old, in India. This Frenchwoman went there to work in a leprosarium just after the 1914-1918 war.

She never went back to France. When I saw her for the first time, she had her arms around a leper who was about to die. It was the first time I saw an act of such generosity.

Later, we became friends and I kept her photo on my night-table for a long time.

The extraordinary people I meet are often men and women of religion. I do not believe in God, but one must admit that they have something extra. Perhaps it’s because they do not marry and can devote themselves completely to others.

But beyond that, I’m certain that taking action makes one happy. Giving oneself to others make one happy. Basically, that is what the Pope is saying.

Are you going to meet the pope?

I would really have loved to interview him for Human, my documentary published in 2015.

Unfortunately, that was not possible. I would be happy to meet him, but I do not expect much from a formal meeting. What I would like is to sit next to him and for us to have enough time to discuss our ideas on ecology.

Synod, Day 3: Speaking to young people, not about them