Synod of Bishops: Young people want us to speak out 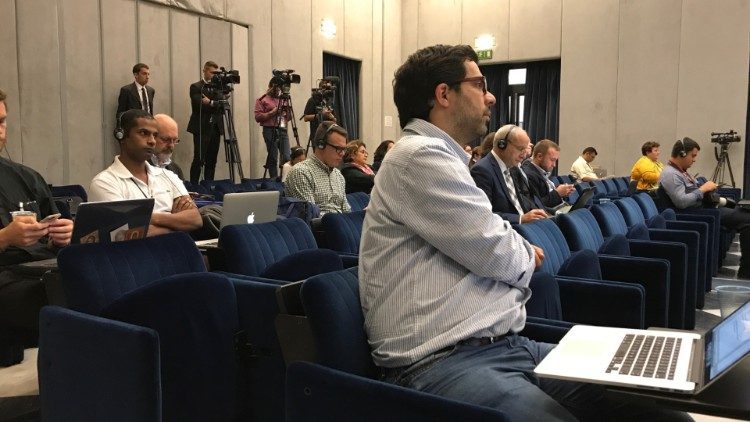 Dr Paolo Ruffini, Prefect of the Vatican Dicastery for Communication, said that the Synod had concluded with the third part, the pastoral response to young people. The final document is being drafted and will be presented to the bishops on Tuesday for discussion and amendment.

Cardinal Blaise Cupich from the USA said that he will do his best to give voice to young people because that is what they are asking the bishops to do. The Cardinal said that young people spoke about war, poverty, unemployment, migration, arms trafficking and governments who turn to war easily to deal with issues. He said that young people are asking the bishops to give their high-profile voice over to them to address these issues. They want bishops to speak to world leaders because they fear decisions being made now are putting their future and that of future generations at risk.

People have a right to stay at home

Both Cardinals Cupich and John Ribat from Papua New Guinea said that although many people choose to migrate, we must also acknowledge that people have a right to stay at home and have the right to proper development. Many people don’t want to be distant from their roots – including their language and their traditions.

The place of Scripture

Archbishop Peter Andrew Comensoli from Australia said that he has noticed that the discussions in the Synod – those in the assembly and in the small groups – have developed over the last few weeks. Things have got deeper, he said. He said that much more Scripture has entered the approach the bishops are taking. He said that the Synod wants the Gospel to speak into the realities of young people today.

Archbishop Comensoli said that sex abuse by clergy has been spoken about from the beginning of the Synod. He says that during the Synod there was an acknowledgement of the Church’s failure – naming the failure, recognising the issue, asking for forgiveness and a concerted effort to act on this. He said that although this has surfaced at the Synod, the meeting called by the Holy Father in February will look at this issue much more deeply than what the Synod has been able to do.

Cardinal Cupich said that he is confident that the Holy Father has called the February meeting to get something done because he is a man of action. He said that he reiterates again that he too cedes his right or authority to be investigated if there are any allegations against him. He said that he believes that people, lay people especially, want the Church to get this right and for the Church to succeed.

Both Cardinal Cupich and Archbishop Comensoli reiterated that homosexuality is not the cause of clerical sex abuse. Both said that professional research in the USA and Australia has come to the same conclusion.

The unchurched (or de-churched) are present in the voices of the young auditors at the Synod, the bishops said. They speak on behalf of their families and friends who have distanced themselves from or left the Church. Archbishop Comensoli said that the Synod will address this broadly but that this issue needs to be taken up regionally in Conferences and Dioceses. He said that the Synod has looked at the broader questions as to why young people have left but that this now needs to be looked at in particular localities because reasons differ. Cardinal Ribat said that it is a painful issue for many youth and that they find it hard to talk about this. It is their friends and family that have left. He says that the young people have been open about what has led others to leave the Church.

Cardinal Ribat said that the Church’s approach is to welcome everyone, not excluding anybody. Everyone, he said, is looking towards the Church as a place they can call home. He said that youth are helping the bishops to better understand the issue of same-sex attraction.

Cardinal Cupich said that there were a number of interventions about same-sex attraction. He said that in the final document the Synod hopes to have something that is inclusive to all. The whole document must have something to say to everyone, we want to make sure that people are included and that all feel that the document is for them, including young people who identify as homosexual. We must not forget that God’s grace journeys with us, the Cardinal concluded. Archbishop Comensoli said that all are sinners, asking to be found by God, and that we should not forget this.