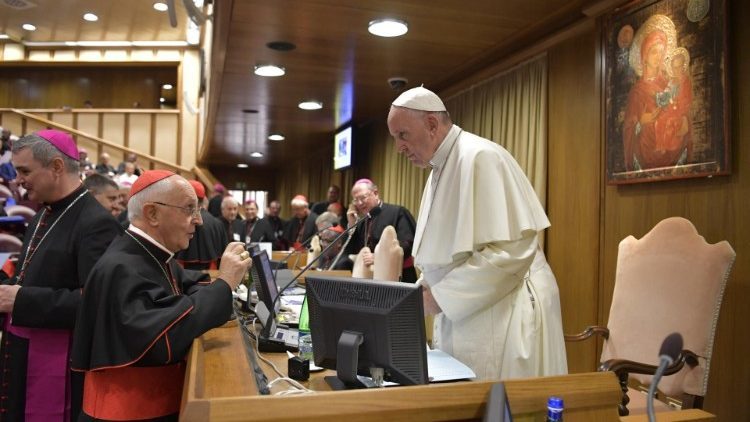 The Synod assembly heard many interventions on the third part of the working document, the Instrumentum Laboris. Dr Paolo Ruffuni, Prefect of the Vatican Dicastery for Communications, began the press briefing by saying that the Synod decided to write a letter to young people and that a drafting committee has been setup.

He listed a number of issues that arose from the assembly. These included the importance of helping young people read the Bible so that the young can rediscover the Scriptures. The importance of faith in action and community was emphasised as well as the need to rediscover fasting in the western world. The role of women was once again a topic of discussion. There needs to be a cultural conversion in the Church when it comes to the role of women, they need to be given an equal place in society and the Church. There was a proposal that a Synod on women should be convened, he said.

Fr Alexandre Awi Mello, secretary of the Dicastery for the Laity, the Family and Life, remarked that he was impressed with the process of the Synod and the work that is being done. He said that the participation from across the world is exceptional.

Migration: Where is Europe’s Christian conscience?

Cardinal Berhaneyesus Demerew Souraphiel from Ethiopia said that migration within Africa affacted mostly young people. He said that the arms trade was not spoken about at the Synod. This, sadly, causes a lot of migration because of wars. Children are often used in the arms trade. He said that for many youth in Africa it is frankly a question of survival before you worry about technology and many other things that have been part of the conversations at the Synod.

The Cardinal also mentioned the exploitation of minerals, especially coltan in the Congo, and how this has displaced whole villages and families because people are moved away so that extraction can take place. The young, he said, are victims of this too.

Cardinal Souraphiel lamented how Africans are treated in Europe. He said that when Europeans left for Africa it was much easier for them. Africans are not treated in the same way that they were. He asked: Where are the Christian roots of Europe? Where is the living out of Christianity? The Cardinal said that it was a Christian value, a Christian obligation, to receive the stranger. Speaking about governmental policies that keep migrants out, he said that it was a matter that goes deep into the question of Christian conscience.

It has been a great experience of communion, there has been a great deal of listening, Archbishop Matteo Maria Zuppi of Italy said. This helps us build a unitary approach and helps everyone focus their thoughts. He said that communion is key if the Church wants to move forward. He says that Pope Francis is the first to talk about communion. It you want to move away from clericalism and nationalism then the way this is done is by seeking communion. He said that the Church speaks to everyone and with everyone because the Church wants to reach everyone. Communion, the archbishop says, is the real identity of the Church.

Sr Alessandra Smerilli, lecturer in economics at the Pontifical Faculty of Educational Sciences told the briefing that the Bishops were really listening and that it was not superficial. She said that she could sense a real love for the young. Sr Smerilli says that she dreams of a prophetic church. She said that economics and ecology share the same roots and that we cannot hear the cry of the young and the poor without hearing the cry of the earth. She said that if we don’t care for the environment we generate a new poverty and it is the young who are the victims of this poverty.

Sr Smerilli said that she believed that if the whole Church put Laudato Si’ into action it would make a real difference in the world. She says that Laudato Si’ addresses many issues linked to poverty and human suffering