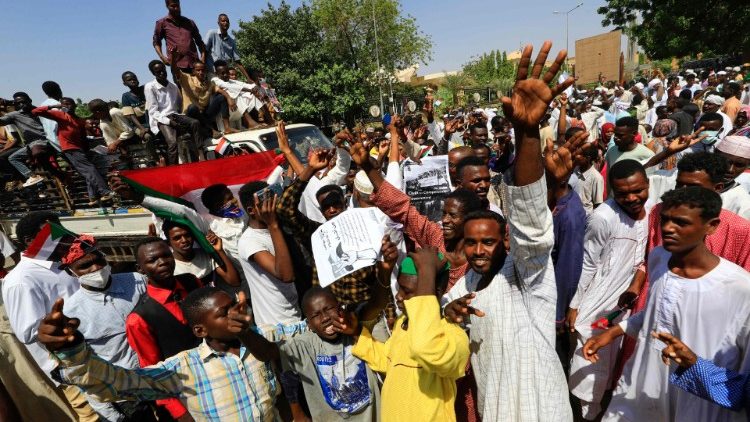 Thousands of Sudanese express their discontent with the nation’s transitional government in a protest. They call on the armed forces to take control of the country.

Several thousand demonstrators gathered in front of the presidential palace in Khartoum, Sudan, on Saturday to call on the military to seize power, as the country grapples with its biggest political crisis in its two-year transition.

In 2019, the government of long-standing President Omar al-Bashir was toppled following popular protests and since then a joint transitional government made up of army officials and civilians has been sharing power in the northeastern African country.

Tensions started to grow in Sudan following a failed coup attempt in September attributed to followers of al-Bashir. Military leaders demanded reforms to the Forces of Freedom and Change (FFC) coalition which led the anti-Bashir protests and are a key part of the transitional government. The armed forces also called for the replacement of the cabinet.

However, the civilian leaders say that the military’s demands are part of a power grab from the armed forces.

During the Saturday protests, citizens called on General Abdel Fattah al-Burhan, the head of the armed forces and Sudan’s joint military-civilian Sovereign Council, to instigate a coup and take over power.

The protesters’ grievances were directed against the government of Prime Minister Abdalla Hamdok whose IMF-backed reforms have hit the pockets of many Sudanese hard.

“We need a military government,” said a protester, “the current government has failed to bring us justice and equality.”

Support for the transitional government has waned in recent times as the citizens struggle through tough economic reforms, including the slashing of fuel subsidies and soaring inflation rates

On Friday, Prime Minister Hamdok unveiled a plan to tackle the country’s worst crisis in its two-year transition.

“I am not neutral or a mediator in this conflict. My clear and firm position is complete alignment to the civilian democratic transition,” he said.

Hamdok was sworn in as Prime Minister in August 2019.

India: at least 25 dead in floods