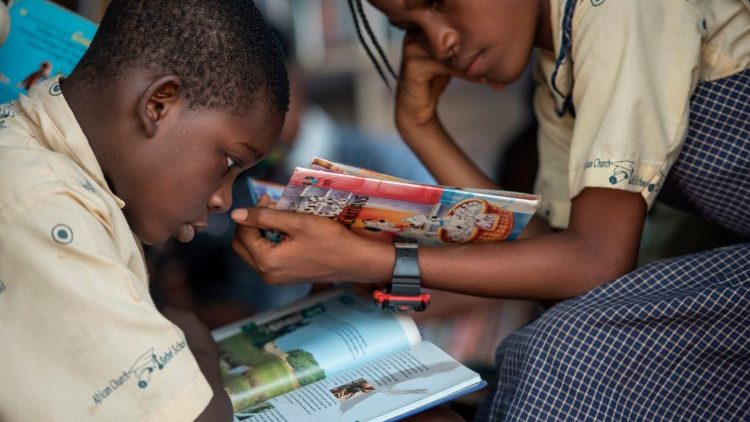 Storytelling in the face of a pandemic

Internationally-recognized author Timothy Radcliffe, OP, explores Pope Francis’ message for World Communication Day, which falls on 24 May, and its implications on the pandemic.

On January 22nd and 23rd, 2020, the director general of the World Health Organisation presided over an Emergency Committee to consider whether the outbreak of a new virus in Wuhan constituted a public health emergency of international concern. The committee was unable to agree. The following day, January 24th, Pope Francis published his message for the 54th World Communications Day, on the art of storytelling. The world was on the verge of waking up to a new global plague. What stories can we tell faced with a pandemic?

The Pope asserts that we need stories ‘so as not to lose our bearings…stories that help us rediscover our roots and the strength needed to move forward together.’ Our stories, communal and individual, shape our sense of time so that we can navigate towards a future with hope. But in this time of lockdown, the usual calendars that give us a sense of future are collapsing. Family gatherings for weddings and funerals are not possible; we cannot come together to celebrate the great feasts of the liturgical year; even the sporting calendar is no longer gives us a sense of anticipation. Our time has become shapeless. A pandemic leaves us without any bearings. We need stories that shape our lives in a time of plague.

Providentially, the Pope’s message begins with a quotation –  ‘”That you may tell your children and grandchildren” (Ex 10:2) – that directly refers to the plagues inflicted on the Egyptians. The blood of lambs on the doorposts of the Hebrews saved them from the final plague, the death of all the first born males. Plagues in the Bible confront us with death, not just as the inevitable fate of every living thing, but as a ruthless power that only the Lord of life and death can overthrow. Every pandemic carries a hint of the apocalypse, of ‘the pale green horse! Its rider’s name was Death, and Hades followed with him.’ (Revelation 6:8).

Plagues have frequently cast the shadow of death over humanity but never before have we been so aware of a global menace. I read every day of how many victims there have been in every country of the world. What story of hope can Christianity offer today faced with Covid -19?

The Jewish Passover was a remembrance of the plagues that led to the liberation of the Israelites from the slavery of Egypt. This memory shaped the Lord’s confrontation with the ultimate enemy of humanity, death on the night before his betrayal. This is the story with which we can find our bearings in a time of pestilence. On that night, all that gave bearing and direction to the disciples collapsed. Everything on which they had staked their hope was about to crumble. Ahead lay only betrayal, denial, desertion, the collapse of their little community, and the suffering and death of the one who called them his friends. . As the disciples on the road to Emmaus said, ‘We had hoped that he was the one to redeem Israel.’ (Luke 24:21). The cross seemed to be not just the death of one person, but the victory of death itself.

So Jesus’ gesture in taking the bread, blessing it and declaring it to be his body, and the wine to be his blood, was gesture pregnant with a hope beyond all their imagining. It did not just grapple with his death the next day, but with the reign of death, reaching forward to the victory of Easter Day.

One glimpses the splendour of the drama of that last night in situations when death casts its dark shadow over while peoples. I first was touched by this during a visit to Rwanda in 1993, as the genocide was beginning to ignite. I was due to visit the Dominican sisters in the north when the Belgian Ambassador came and warned us to stay at home since the country was on fire, but we went anyway. After a day charged with violence, with rebels and soldiers, with children maimed by mines, I went to visit my Dominican sisters. What could I say in the midst of such horror? I was lost for words. Then I remembered that I had a memory and a promise to re-enact, which defied death, and which promised communion when humanity was scattered. This is the story with which we challenge the menace of plague, which is why it is deeply sad that most of us cannot gather together to celebrate it but must watch on-line.

Pope Francis’ message for World Communication Day is an invitation to remember that even in the isolation of our own homes we can sustain communion in ways that were never possible before. We respond to a global crisis with a global communion. The number of people attending the daily Eucharist on-line at my priory in Oxford is three times the number who came to church here before Covid-19. I am receiving a tsunami of emails and phone calls. I skype and zoom as never before.

Yet the physical isolation gnaws at our humanity. We need the nourishment of each other’s faces and the sustenance of gentle touch. If we are deprived of these our humanity is starved. Grandparents are unable to embrace their children, and we find ourselves separated from people whom we love. Zoom and Skype are not enough. How can we bear it?

The story of the Last Supper tells of a communion that is born of Jesus’ deepening isolation. He presides at the Last Supper over a community which is already disintegrating. In the garden of Gethsemane, his disciples sleep while he struggles alone to face his destiny. He is a solitary figure as he stands before the judgment of the high priests and Pontius Pilate, and then he attains the utter solitude of the cross, made unutterably worse by the baying mob below. So one way to bear the isolation which is imposed on billions is as a sharing in the loneliness of Jesus which he bore so that we might belong to each other in him.

In Rwanda, and then more recently in Syria within hearing distance of the front line with ISIS, the pregnant hope of our simple Eucharistic story was unveiled for me. This is the narrative which no pestilence can subvert. And yet for millions of people going to Mass is experienced simply as boring. For many, it does not touch their imagination but is a dreary duty to be endured.

It is paradoxical that one of the most popular stories of the twentieth century, The Lord of the Rings by J.R.R Tolkien is an exploration of his belief in the Eucharist.  He wrote to his son Michael, just before his first communion, ‘I put before you the one great thing to love on earth: the Blessed Sacrament. There you will find romance, glory, honour, fidelity and the true way of all your loves upon earth.’ It appears strange that a romance that touched the imagination of the world is Eucharistic, and yet the Eucharist itself often fails to do so.  How can the beauty of its narrative become evident?

Pope Francis identifies heroism as a characteristic of compelling stories: ‘The stories of different ages all have a common “loom”: the thread of their narrative involves “heroes”, including everyday heroes, who in following a dream confront difficult situations and combat evil, driven by a force that makes them courageous, the force of love. By immersing ourselves in stories, we can find reasons to heroically face the challenges of life.’ The Lord of the Rings is the story of plodding little beings, who fear adventure but become heroes.

If we can see the drama of our Eucharist as story of heroism, it may ignite our imagination. Two examples spring to mind. The first is the early English poem, ‘The Dream of the Rood’ which may date to the seventh century. It portrays Jesus as ‘a young hero’ who mounts the cross to do battle like a knight. The second is the film Des hommes et des dieux, directed by Xavier Beavois, won the Grand Prix at the Cannes film festival in 2010. It touched the imagination of millions because it is the true story of ordinary timid monks becoming heroes. It tells of a small community of Trappist monks in Algeria in the 1990s who are caught up in a rising tide of violence. Should they stay and risk death or go?  The most moving scene is their Last Supper. Old brother Luke produces a couple of bottles of wine and puts on the gramophone the music of Swan Lake. Nothing is said. We just see their faces, filled with sorrow at the suffering that lies ahead and with joy that they will share in the story of the last days of their Lord. It is the utter beauty of a Eucharistic heroism, quiet and without pretension.

How can we live this present situation heroically and so touch the imagination of our contemporaries? In earlier plagues, such as the Black Death, Christians went out and ministered to the sick risking death. The heroes of our plague are the nurses and doctors who labour on the front line. Many of them do so as an expression of their Christian faith, but how can the Church explicitly live out the drama of the Eucharistic story now, when churches are closed, and many hospitals, at least in the UK, do not let chaplains enter?

I have come to accept, with difficulty, the wisdom and rightness of the decision to self-isolate the clergy. Otherwise we would become instruments of contagion ourselves. There are some examples of heroism:  Don Giuseppe Berardelli, the 72 year old priest who gave up his ventilator so that a young person could live and who died as a result, or I think of an American Dominican working in New York who has moved into a hospital to be of service to the sufferers from the virus, even though it means leaving his community. But I struggle to imagine how the Church can make clear the heroism of our great story faced with Covid-19. Self-isolation may be necessary but it does not look heroic! Maybe it is with a sort of holy realism, looking death in the face, acknowledging the unique drama that each victim undergoes, but refusing to panic, for we belief that death’s rule is over.

There is a final theme in the Pope’s message which has become unexpectedly relevant in today’s crisis. Francis stresses the beauty of telling our own stories to God. ‘To tell our story to the Lord is to enter into his gaze of compassionate love for us and for others. We can recount to him the stories we live, bringing to him the people and the situations that fill our lives. With him we can re-weave the fabric of life, darning its rips and tears.’

Many people this Easter have been unable to receive the sacrament of reconciliation. Two months after the publication of his message, the Pope urged the faithful to confess their sins to God if not priest is available. This need not just be a recital of sins but, as the Pope’s message suggests, the sharing of one’s story with God, with its dramas, failures and triumphs. Thomas Aquinas, in his Scriptum super librum IV Sententiarum, goes further and says that when there is no priest, one can recite one’s sins to another lay person, who cannot give absolution but who is a sort of minister of the sacrament ‘by necessity’. So in this crisis, we can all represent the merciful ear of God, attending to the drama of each other’s lives, reassuring each other of love’s final victory.