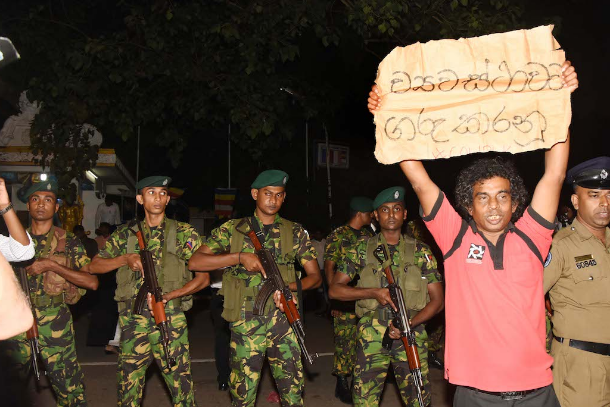 Sri Lanka’s Supreme Court has suspended the president’s controversial decision to dissolve parliament.It ruled on Nov. 13 to suspend the order by President Maithripala Sirisena calling a fresh election following his attempt to install Buddhist strongman Mahinda Rajapaksa in the prime minister’s office.MPs are planning to meet to decide between the two men claiming to be the country’s lawful prime minister.The constitutional crisis began after Sirisena dissolved parliament on Nov. 9, only five days before it was due to reconvene, and called a general election on Jan. 5, 2019.Sirisena, 67, sacked his coalition partner, Prime Minister Ranil Wickremesinghe, 69, on Oct. 26 and replaced him with former president Rajapaksa, 72.Civic rights activists and several political parties filed 13 fundamental rights petitions in the Supreme Court challenging Sirisena’s decision to dissolve parliament. Five other petitions supported the decision.Activists argued that the president only has the power to dissolve parliament when four years and six months have elapsed since the first sitting of the current parliament. Legal experts said that, according to the constitution, parliament can be dissolved only in early 2020.The Centre for Policy Alternatives (CPA), which filed a petition arguing the dissolution was illegal and unconstitutional, warmly welcomed the Supreme Court’s decision.”In granting interim relief in the form of staying the impugned dissolution, the Supreme Court bench has acted to uphold constitutional due process in what was a rapidly deteriorating situation,” said CPA executive director Paikiasothy Saravanamuttu.”It is a welcome intervention that will strengthen the prospects of a resolution to Sri Lanka’s constitutional crisis. We commend the Supreme Court for strongly signaling its commitment to judicial independence, democracy, fundamental rights, the rule of law and the constitution of Sri Lanka.”Speaker Karu Jayasuriya convened parliament on Nov. 14 and passed a no-confidence motion brought against Rajapaksa and his cabinet with a majority. Parliament adjourned until Nov. 15 after a tense situation. Hundreds of activists and political party supporters demonstrated for and against Rajapaksa close to parliament in the morning.Rajapaksa, who will celebrate his 73rd birthday on Nov. 18, was a rival candidate to Sirisena in the last presidential election in 2015.International and local pressure is growing for Sirisena to resolve the political crisis.Wickremesinghe said he now had an opportunity to demonstrate he commanded majority support in parliament.”Today we have witnessed a resounding victory for the people’s franchise,” Wickremesinghe said. “The powers of the president are limited and he must act according to the law. He is not above the law.”

U.N. chief Antonio Guterres and the European Union called for respecting democratic processes and institutions and resolving differences in accordance with the rule of law and due process.Senaka Perera, an attorney-at-law and human rights activist, said the Supreme Court has given a verdict that sovereignty cannot be violated by anyone.”The president’s action of dissolution is unconstitutional and people have come to the streets and called for democracy and filed petitions,” Perera told ucanews.com.The Anglican Church expressed its shock and great dismay over the dissolution of parliament by the president.”The actions of the dismissal of a sitting prime minister, the appointment of a new prime minister, the prorogation of parliament followed by credible accounts of inducements to members of parliament to cross over and the shifting stories about the premiership being offered to other members of parliament are further compounded by this latest action of the president, underscoring the fact that the newly appointed prime minister did not command the confidence of parliament,” it said in a statement on Nov. 13.”All these events showcase the sad depths to which ethical and moral standards have deteriorated in this country despite our external show of religiosity.”The Rajapaksa regime was criticized for human rights violations during the 26-year civil war against Tamil rebels.

St. Francis of Paola: An Italian Refuge for 100 Years