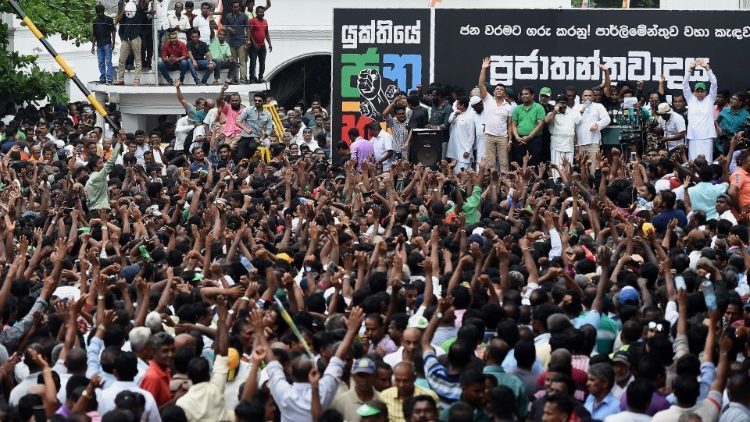 The Catholic bishops of Sri Lanka are calling on the nation’s government, political parties and the people to resolve the political and constitutional crisis peacefully, keeping in mind the good of the people.

Wickremesinghe said his sacking was illegal and he maintained that he was still prime minister, leading to a standoff between his party and labour unions loyal to Sirisena.

The following day, Sirisena suspended Parliament until November 6, in an apparent move to give Rajapaksa time to muster enough support to survive any no-confidence vote.

People suffer most in crisis

“Everyone should keep in mind that, if there is instability in the country, it is the people who suffer,” said a statement signed by Bishop Winston S. Fernando of Badulla, the President of the Catholic Bishops’ Conference of Sri Lanka (CBCSL).  “We sincerely appeal to all political parties to put aside their interests and respect the Constitution of the Republic of Sri Lanka to resolve the ongoing conflict,” Bishop Fernando wrote in the statement which he forwarded to the Vatican’s Fides news agency.

Sri Lanka’s Bishops said they were “deeply interested in the situation in the country”, and were intervening at a time of a deep crisis.

Sirisena said he sacked Wickremesinghe mainly because of the alleged involvement of a Cabinet minister in a plot to assassinate Sirisena. He did not reveal details of the alleged plot.

The crisis deepened further when Sirisena on Monday swore in a new Cabinet on Monday despite a warning by Parliament’s speaker of a possible bloodbath if lawmakers are not summoned immediately to resolve the crisis.

Sri Lanka’s bishops reminded those concerned that the nation “has already suffered” because of the long civil war and that “enough blood has been spilt“, so they ask all political exponents “to act with caution”. “The rule of law and democracy should prevail through decisions taken faithfully following the Constitution, in this moment of crisis”, the bishops said.

The bishops pointed out that what is important is “not to remain in power or to obtain power”, but “to put ourselves at the service of people and the common good, for the development of the country, exploiting all the resources and realizing the great potential that is found in people and natural resources in our beloved land”.

The bishops urged for prayers that “wisdom and balance prevail”.

Algeria prepares for beatification of 19 martyrs