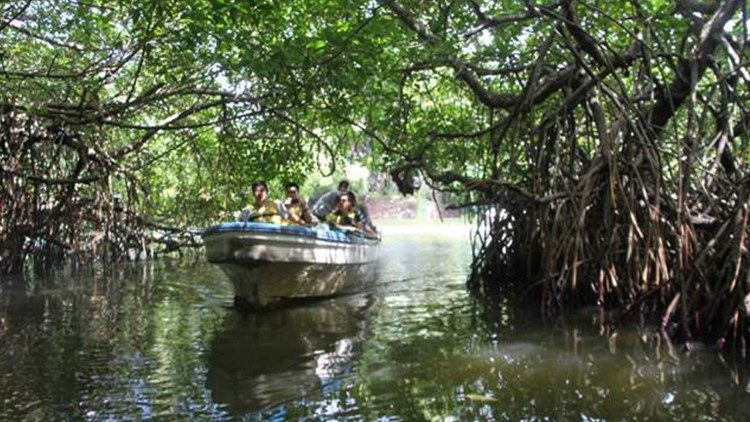 Sri Lanka’s Catholic Church is opposing the government acquisition of a part of the Muthurajawela wetlands near Negombo saying it would affect the livelihood of local people and harm the environment.

In an official Gazette notification on October 07 by the government of Sri, the Western Province’s Urban Development Authority (UDA) has decided to take over a part of the land of the Muthurajawela wetlands, situated some 30 km north of the capital Colombo, near the western coastal city of Negombo.

Cardinal Malcolm Ranjith, Archbishop of Colombo, on Saturday filed a petition with the Sri Lankan Supreme Court against the appropriation, saying the project would affect the livelihoods of the people and various religious sites in the area.

On Sunday, the Archdiocese of Colombo, under whose jurisdiction comes Negombo and the marshlands, released brochures and leaflets explaining to the faithful about the possible damages the government’s move could cause.

On Tuesday, priests and nuns joined a street demonstration in Negombo in which hundreds of fishermen and women protested against the government’s move.  They also demanded justice for the families of the victims of the 2019 Easter Sunday terrorist bomb attacks.

“The acquisition of the lands will be a great disaster for the people,” said Father Jayantha Nimal, parish priest of St. Nicholas Church in Bopitiya.  Addressing the demonstrators, he urged authorities not to deprive the people of their right to live freely. “We ask the government to listen to the voice of the people,” he said, adding the acquisition of land around the wetlands will cause great damage to the environment as well as the fishing community.

Father Ranjith Terry, the parish priest of St. Mary’s Church at Pitipana in Negombo, urged people to remain united in the fight for justice.

Romel Fernando, who participated in the demonstrations, said the government wanted to undermine the activities of the priests and rights activist

Human rights activist Brito Fernando said: “We took to the streets to tell the government that we would not remain silent while our lands and sea are being taken away.”

The Sri Lankan government’s move and the protests come as the crucial COP26 United Nations climate talks in Glasgow, Scotland, are trying to decide on a final agreement to rein in global warming by slashing greenhouse gases.

Cardinal Ranjith said that Catholics across the island nation were appalled by the Gazette notification which would also mean the acquiring of coastal Catholic churches by the UDA. According to him, the acquisition of the part of Muthurajawela “would severely affect the livelihoods of the people living in the area.” “There are a number of religious sites”, and “religious activities would also be adversely affected,” AsiaNews reported the cardinal as saying.

Known for its unique and highly diverse ecosystem, the Muthurajawela marshlands are listed as one of the 12 priority wetlands in Sri Lanka. Besides hosting over 190 species of flora and 200 species of fauna, the area is a major local and tourist attraction, which also supports the local economy.

Kavinda Jayawardena, a Catholic lawmaker from the Jaela Gampaha district, and fishermen from the Negombo area have challenged the UDA’s land acquisition, saying it is “a violation of the fundamental human rights enshrined in the Constitution.”

The government has said that it wants to protect Muthurajawela, but it is actually planning to build a power plant that would serve the city of Colombo.

Environmentalist Dinusha Nanayakkara spoke to AsiaNews about the rich flora and fauna of the wetland, adding it is also a stopping a reproducing ground for flocks of migratory birds. Most importantly, the benefits of the wetland are not limited to the environment but also to the economy and local communities.

Nanayakkara notes that according to the International Union for Conservation of Nature, flood control by the wetlands saves the Sri Lankan government an equivalent of US$ 2.4 million with an additional economic benefit of US$ 3.6 million.  The environmentalist lamented that in recent years, Muthurajawela has been facing progressive degradation with animal remains from slaughterhouses and wastewaters from illegal liquor production dumped into its streams. It has also fallen prey to illegal buildings.