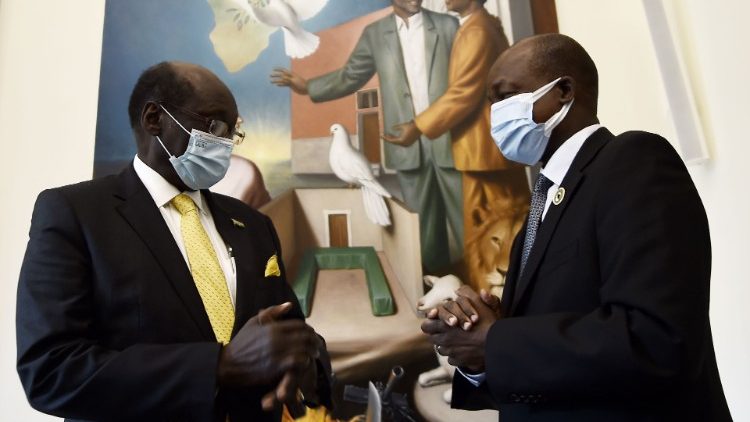 South Sudan’s government and nation’s Opposition Movement Alliance announce the signing in Rome of a ceasefire agreement reached thanks to international mediation efforts.

A new commitment by South Sudan’s warring parties to silence their weapons represents a beacon of hope for the ravaged nation.

Thanks to its tireless efforts and experience in conflict mediation, the Rome-based Community of Saint Egidio on Wednesday announced a breakthrough in talks between South Sudan’s government and the Opposition Movement Alliance  who have agreed to a ceasefire and to pursue dialogue in the quest for peace in the world’s youngest nation.

It was also announced that the Saint Egidio Community is organizing meetings between military and political representatives of both sides to ensure the opposition is included in established mechanisms to monitor ceasefire violations.

Those meetings are scheduled to take place, in Rome, from 9 to 12 November and on 30 of the same month.

The first encounter foresees a workshop with the participation of military representatives, whereas the second aims to result in the signing of a declaration of principles of political nature. Federalism, the Constitution, security, land allocation and reconciliation are among the issues on which to reach an agreement.

Paolo Impagliazzo, Secretary General of the Community of Saint Egidio presided at the press conference to announce the ceasefire agreement together with Benjamin Barnaba representing South Sudan’s government, and General Thomas Cirillo Swaka, the leader of the South Sudan opposition movement (SSOMA), a coalition of forces that did not adhere to the 2018 Addis Ababa peace accords.

Despite efforts by other rebel groups, the National Salvation Front had not signed the September 2018 peace deal, and while the leader of the rebel group agreed to a ceasefire earlier this year, there have been numerous violations.

“Today it was possible to rebuild trust between the parties after the pause of the pandemic, which unfortunately resulted in the resumption of clashes,” said Impagliazzo, referring to ceasefire negotiations in January and February.

Barnaba recalled Pope Francis’ invitation to the warring parties to focus “on what unites and not on what divides”.

General Swaka assured that opposition forces “are committed to dialogue with the government to find a solution to the conflict in the region”.

Pope Francis has repeatedly prayed and appealed for peace in South Sudan. In April 2019 he hosted a retreat in the Vatican with the country’s warring leaders. During that occasion the Pope made the unprecedented gesture of kneeling to kiss their feet as he urged them not to return to civil war.

Over 380,000 people have been killed and 4 million, a third of the country’s population, have been displaced, in a seven-year civil war.