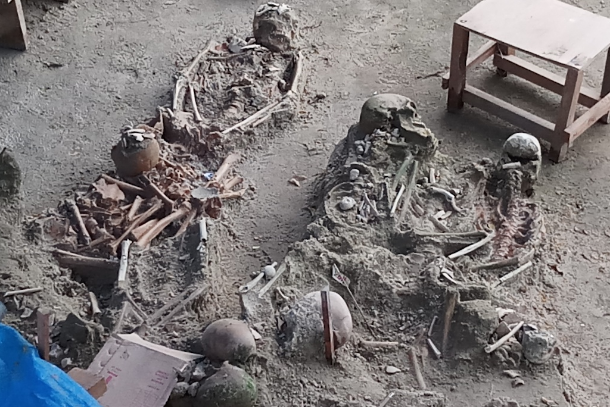 The skeletal remains of 114 people including 12 children have been unearthed from a mass grave at a former war zone in Sri Lanka as rights groups clamor for justice for the victims of wartime atrocities.Now local communities are anxious to find out if the skulls and bones belong to their slain Tamil kin.The site stands as a tragic legacy of the civil war between the military and Tamil Tiger separatists that ended in 2009.D.R.A.S Rajapakse, the chief investigator examining the site, revealed the findings in September, some six months after the grave was discovered by a construction team. His team has been digging there for two months.The construction team stumbled upon this testament to the fighting over a decade ago while laying the foundation for a new building where an old warehouse once stood in Mannar district of Northern Province

“There are no eyewitness accounts nor any records pertaining to this mass grave, so it’s important the investigation into what happened here is carried out properly,” said Rajapakse, who serves as a judicial medical officer (JMO) at a district hospital.”We have more ground to cover, so right now everything is a bit chaotic with pieces of skull and bone scattered here and there,” he said. Both the government and the Office of Missing Persons (OMP) are funding the mission, he said, adding the skeletons will be analyzed to determine their age and when and how they died.Rights groups battling to resolve cases of enforced disappearances believe there are many such graves waiting to be found as a result of the 26-year war that caused over 100,000 fatalities and left thousands missing
The conflict broke out in 1983 when the Liberation Tigers of Tamil Eelam (LTTE) fought to carve a separate Tamil homeland in the north and east of the country. Sri Lanka is now facing international pressure to allow an independently run international investigation to be carried out into alleged war crimes meted out by both parties during that heady period.According to the United Nations, the country has the world’s second-highest number of forced and unexplained disappearances.Tamil human rights lawyer Balasubramaniyam Deniswaran said earlier this year that one of his friends and a teacher from Mannar informed him they had seen human skeletons mixed with sand loaded on lorries at the site.It is believed to have been occupied at various points since 1974 by the Sri Lankan and Indian armies as well as a specialist intelligence unit, Deniswaran said.”The examination should be concluded quickly so that we can determine what period the remains belong to and when they were buried,” he said.”We still don’t know what happened to so many people from that period who just vanished. Our [Tamil] community is desperate to know if any of the skeletons belong to their long-lost relatives.”He said previous cases involving mass graves led to mass disappointment as the skeletons were sent for testing after which no further steps were taken.”People here suspect the same thing will happen again,” Deniswaran said, citing one case in Manthai in 2014 when 43 human remains were found.”Many countries face punishment from the International Court of Justice [ICJ] for war crimes,” he said. “Once we confirm these remains date back to our civil war, or prove the military is responsible, we can take our case to the international community to see justice served.” Jeyamary Marsila, 59, has been searching for her son, Jesuthasan Iruthayaraja, for the last 12 years.”We believe he was abducted while he was coming home from fishing,” she said.”I’ve contacted the Human Rights Commission, the International Red Cross and the U.N. office here to petition them to investigate what happened to him, but no one ever replied.”Now I can’t stop thinking that his bones may be among these skeletons. Many other mothers here feel the same way as they also have lost relatives and never got any explanation as to what happened to them. We are living in fear.”Father Jeyabalan Croos, a Tamil human rights defender, said the government appears reluctant to honor its commitments to the U.N.”The government doesn’t have the political will to do that. We could say it lacks a sense of justice. It’s not even interested in listening to the people who have suffered and who are still suffering,” he said.”If we look back at those mass graves unearthed in places like Manthai or Thirukeethiswaran, things looked promising at first but then everything got conveniently swept under the carpet.”But now modern forensic methods can date the remains while DNA tests can help us delve deeper into the truth behind their deaths. So many people are still searching for their loved ones.”Rajapakse said his team is moving slowly but carefully to ensure the examination is conducted in a scientific and transparent manner due to the gravity of the discovery.”There are days when we dig and dig but we don’t find anything, not a single bone,” he said, adding the excavation work is complicated because it is not a formal burial site. “Many of the remains are overlapping. But our main concern is that we remain impartial and find out the truth.”
Share FacebookTwitterGoogle+WhatsAppPinterestEmail