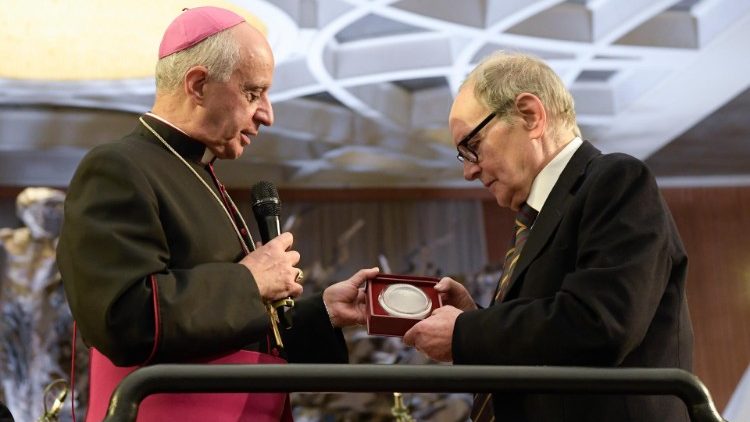 The Oscar-winning composer, Ennio Morricone, whose music defined the atmosphere and success of hundreds of films of all genres, has died in Rome, aged 91. Lesser known are his production of Sacred Music and his admiration for Pope Francis.

The glory of Ennio Morricone’s genius cannot but elevate the listener to the heavens in a score written for Pope Francis and the 200th anniversary of the founding of the Society of Jesus.Listen to our report

It’s the Missa Papae Francisci, performed for the first time on 10 June 2015 at the Chiesa del Gesù in Rome, dedicated to Pope Francis and to the legendary composer’s wife, Maria, to whom, as he never ceased to say, he owed everything.

We are all familiar with the music of Morricone, the soul and poignant ’emotion-maker’ in films like “Once Upon a Time in the West“, “The Mission“, “The Legend of 1900“, and many, many more.

But not everyone knows that Morricone’s career began in 1950, when he arranged music for the Holy Year so successfully that he was then commissioned to arrange a long list of popular songs of devotion for radio broadcasting.

A love for Sacred Music

Although crowds flocked to listen to him conduct world-class orchestras perform his music for film, he never tired of expressing his love for sacred music and Gregorian chant.

Alongside his “Hollywood” career, Morricone composed religious music constantly – including a cantata with words by St. Pope John Paul II and the mystical Vuoto d’anima piena for the millennium of the Cathedral of Sarsina, in northern Italy.

A Jesuit friend, he revealed, asked him in 2012 to compose a Mass for the upcoming anniversary of the Jesuit Order. He said he dallied until the election of the new Pope, the first Jesuit Pope in history.

“The dedication to him was spontaneous. Then I was able to meet him in the Vatican and show him the score”, he said in an interview.

A score composed in the shape of a Cross

He also explained that he composed the written score of the Mass with the Trinity in mind and in the shape of a cross: “a musical cross that starts with two horns that follow two different long melodies, then the trumpet that makes a soft and light sound, and then comes the vertical dimension of the orchestra”.

In 2019 Cardinal Gianfranco Ravasi, President of the Pontifical Council for Culture presented Morricone with the Medal of Pope Francis’ Pontificate for his “extraordinary artistic work in the sphere of music, universal language of peace, solidarity, and spirituality”.

Meanwhile, if you listen carefully, you will notice that in the final section of the Mass, Morricone re-proposes Gabriel’s Oboe, the theme from the film “The Mission”, undeniably one of the most beautiful scores ever written for film, and a powerful evocation of the turmoil of Jesuit missionaries and their fight for the rights of indigenous peoples.