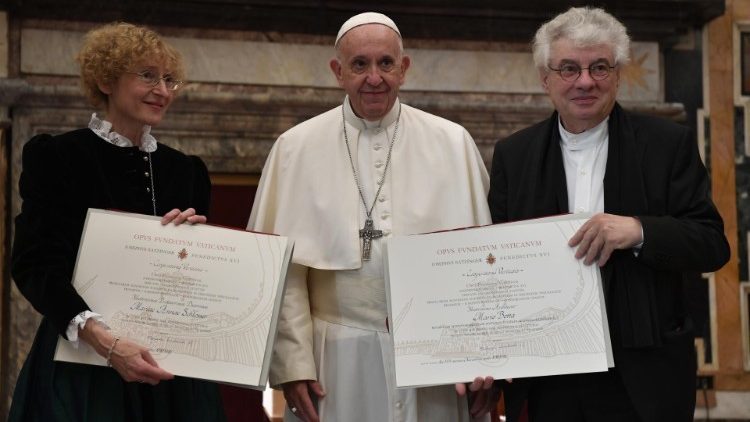 The external and internal contributions that both winners have made to the world of faith are not to be underestimated. Both Mario Botta, an architect and Marianne Schlosser, a theologian, work to facilitate the act of faith, though one works on the external expression of faith and the other on the faith that comes from within.

This is perhaps one of the reasons for which they are being awarded this prize. Seventy years after the UN’s Universal Declaration of Human Rights, both winners help explain how the Church is responding to the new challenges facing Human Rights, acting as mediators between societies and needs.

“Architecture must have an ethical end rather than an aesthetic one”. This is one of the values Mario Botta applies when designing. We see this, and can begin to feel it when we look at his sacred buildings, such as Évry Cathedral in the suburbs of Paris. Mario Botta does not just create spaces to be used to spend time with God, in prayer and in thought. He creates his spaces in a way in which they can be shared with God. He builds God’s house for God and all those who may want to visit Him.

Botta has said that his sacred and theologically-driven architecture has brought him closer, both to his faith and to his profession. He has noticed the power that comes with the eternal need to build churches. There have been 2,000 years of building spaces in which people can pray. In that time, the Church has “overcome all transformations, revolutions, wars, changes in ideologies”: each church structure is built in correspondence with the times – applying light, gravity, and lines to the elements that have evolved into today’s styles.

The other winner of this year’s Ratzinger Prize, Marianne Schlosser, is also a communicator of faith. Schlosser promotes her faith through the theology of spirituality: the imperative need for spirituality that surrounds faith. To her, all elements of life are moulded by God’s revelation of Himself. The fight for God’s friendship, according to Schlosser, is at the heart of spiritual life. In fact, for Marianne Schlosser, life finds order in the living relationship with Christ, as it is this relationship that sparks all the elements that help to form one’s character.

She believes in love, in friendship, in knowing oneself, and in fighting for these three elements. As a professor, she has created and is to this day holding up a much used bridge between the world of academia and that of faith, and for her, this forms the basis of how she lives her life