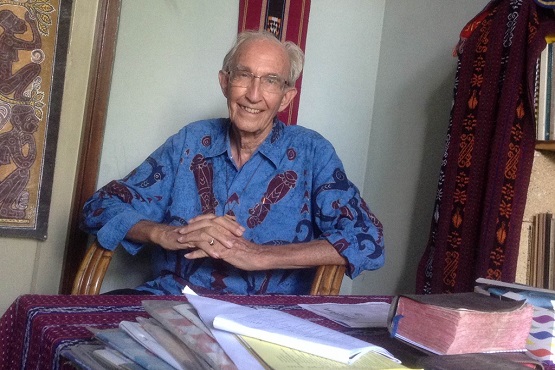 Olivia Bekindo was just a third-grader when her mother died in 1995 of an undiagnosed illness. She was in so much pain that she could not eat for days and her interest in school vanished. Her siblings felt the same.Seeing such abrupt changes in his children, Bekindo’s father took her and her two other siblings to Hawai Orphanage which was founded by Dutch Franciscan Father Nico Syukur Dister and Belgian Franciscan Sister Maricen Warson in Jayapura, Papua.The orphanage took the children in to live there. Bekindo made friends with many other children from remote villages who had lost their parents. “My father took me and my sisters there because he thought we would not be able to continue our school after our mother died,” Bekindo told ucanews.com.Father Dister founded the orphanage in early 1992 upon the recommendation of the late Sister Warson after the nun discovered that poverty prevented many children from going to school.There were a lot of orphans at that time because of a lack of health facilities. Maternal mortality rates were high and if someone got sick it was hard to access medical care

“Sister Maricen came to me and said that something has to be done for these children,” Father Dister said. After consulting with fellow priests and local leaders, he established Putri Kerahiman Foundation in 1992. Its first project was to build Hawai Orphanage.The decision of Bekindo’s father to take her to the orphanage was not a mistake. After she finished elementary and high school, funded by the orphanage, she continued to Fajar Timur School of Philosophy and Theology in Abepura, Papua and graduated. Now she is working and preparing to continue her studies overseas

Dozens of other Papuans have succeeded with the help of the priest.Alfonsa Wayap, who is studying communications in Yogyakarta on Java Island, said many Papuan children owed their life and education to Father Dister. “Even though we were reckless and careless Father Dister never stopped pushing us to finish our studies,” she said.”He would always find ways of getting money to help students continue their studies,” Wayap said.As sign of gratitude, Wayap and her friends founded a group called Gerakan Papua Mengajar (Teaching Papua Movement) to teach children in Jayapura how to read and write.Father Dister said that the primary goal of the orphanage was to create a future for Papuan children who had lost their parents and were victims of a lax education system.He discovered that many children who had lost a parent failed to finish school because no-one was there to motivate them or pay for their classes. Even worse, Papua does not have adequate schools, lacks teaching materials and has a shortage of teachers. Many children were rejected from high school in Papuan cities because, although they finished elementary school, they could not read or write.When Hawai Orphanage filled up the priest established Palomo Orphanage especially for boys and, to meet their health needs, he also built a clinic which is he also opened to the public. He then started a vocational training division where children can learn cooking, sewing, reading, and play music.”We do all this stuff in the hope that the children of Papua will have a better future, inspired by Gospel values and the Franciscan spirit,” Faterh Dister said.

Finding Christ in othersFather Dister came to Indonesia in 1972 and became philosophy professor at the Jesuit-run Driyarkara School of Philosophy in Jakarta. Ten years later he was naturalized and in 1983 he moved to Papua where he served as academic dean of Fajar Timur Philosophy and Theology School in Abepura, Jayapura.In Papua, the priest began to explore the world outside of academia and started becoming interested in social work which changed his perspective. “Now, my social involvements reflect my faith,” he said.”Just as Jesus said that whoever does something for the little ones he does it for me, I found Christ in other people,” he saidFranciscan Sister Marice Kuayo, who has headed the Hawai Orphanage since its establishment, said the orphanage is currently taking care of 10 children who are studying at kindergarten, 41 elementary students, 46 high schools and 11 senior high students.Carlos Matuan, a local government official, said the orphanage is a timely response to the needs of Papuan children “who are looking for education.””We hope that it will help more children,” he added

Happy Feast Day to all my Franciscan friends