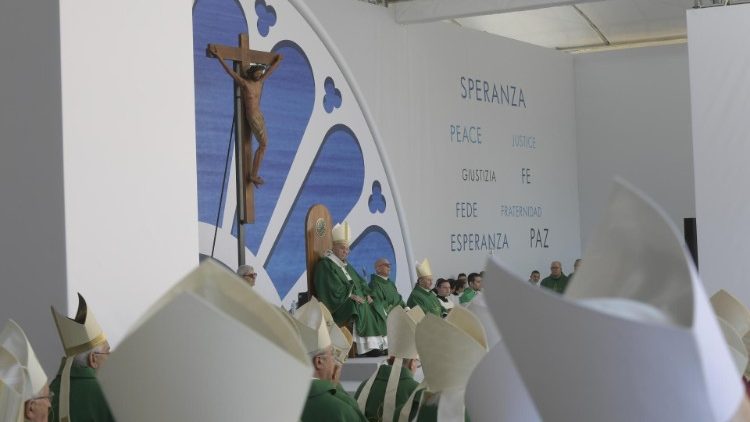 Pope Francis will travel to Florence, in central Italy, on 27 February 2022, to greet the mayors, the highest-ranking officials of Mediterranean cities, and to meet with families of refugees and migrants.

Pope Francis is scheduled to travel north to Florence next February for a meeting dedicated to issues and dynamics that are particularly relevant and of impact for cities, towns, and communities bordering the Mediterranean Sea.

He returns to the Tuscan capital after a visit there six years ago when he participated in the V National Convention of the Italian Bishops’ Conference. On that occasion, he delivered a discourse in which he outlined a forward-looking programme for the entire Italian Church.

Confirming the visit on 27 February next, Cardinal Gualtiero Bassetti, President of the Italian Bishops’ Conference, expressed “deep gratitude” to the Pope for “for this gesture of attention towards the initiative that involves the ecclesial and civil communities of the Mediterranean.”

As he did when he went to Bari in February 2020 for the meeting of reflection and spirituality, “Mediterranean: Frontier of Peace,” the Pope “not only blesses the initiative, but also puts his seal on it, assuring his participation on the final day,” Cardinal Bassetti said.

That meeting in the southern Italian city of Bari brought together bishops from twenty nations bordering the Mediterranean at a time in history when tens of thousands of migrants were risking their lives crossing the Sea in their quest to enter Europe. In his address for the occasion, Pope Francis presented Jesus’ mission around the Sea of Galilee as a model for Christians, saying: “Just as Jesus lived and worked in a context of differing cultures and beliefs, so we find ourselves in a multifaceted environment scarred by divisions and forms of inequality that lead to instability. Amid deep fault lines and economic, religious, confessional, and political conflicts, we are called to offer our witness to unity and peace.”

Thanks to the Pope’s 2022 Meeting in Florence, Bassetti said, ecclesial and civil institutions of the Mediterranean basin will be able to renew their joint commitment to face the challenges of the contemporary world.

He noted that Pope Francis had spelled out those challenges a year ago, inviting participants to “to restore relationships that have been broken, to rebuild cities destroyed by violence, to make a garden flourish in what is now a desert, to instill hope in the hopeless, and to encourage those caught up in themselves not to fear their brothers or sisters. And to look upon this [sea], which has already become a cemetery, as a place of future resurrection for the entire area.”

In the communiqué confirming the Pope’s visit to Florence, Cardinal Bassetti goes on to say, “The challenges we are called to face constitute a stimulus to overcome barriers between Mediterranean countries and to promote encounter and communion between sister Churches.”

He added, “Only by weaving fraternal relationships is it possible to promote the process of integration. Let’s start again, from Florence, to ensure that the shores of the Mediterranean return to being a symbol of unity and not of borders.”

The Pope’s Florentine visit will begin when his helicopter lands in the city’s “Luigi Ridolfi” athletics stadium at 8 am. He will then travel to the city’s historic Palazzo Vecchio to meet with bishops and mayors. Cardinal Bassetti, Dario Nardella – the mayor of Florence – and a mayor from a Mediterranean capital, will greet the Pope, who will deliver a speech. Afterward, he will meet with a group of mayors of other cities.

One highlight of the day will most certainly be his meeting with families of refugees and displaced persons. According to the Holy See Press Office, there will be about 50 people present. Pope Francis will then celebrate Holy Mass in the Basilica of Santa Croce followed by the recitation of the Angelus in the Square outside the Basilica. His return to the Vatican is scheduled for 1.30 pm.