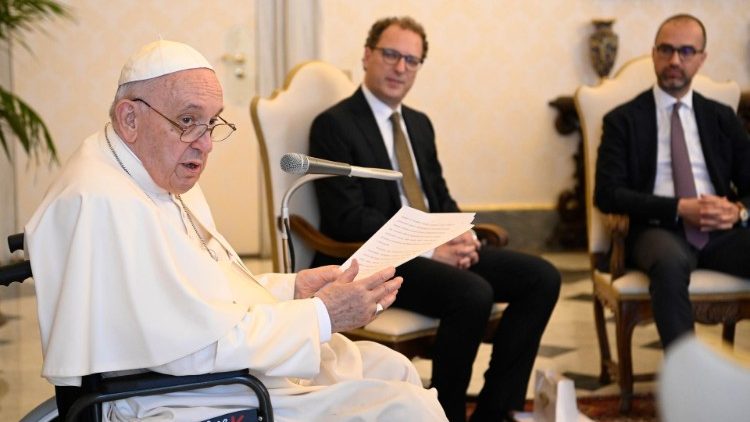 Pope Francis meets with University Rectors from Italy’s Lazio region on Monday, inviting them to commit their institutions to rethinking economic, cultural and social models that put the human person back at the centre. He also encourages them to continue to welcome students and teachers who are victims of war and persecution.

In his address to University Rectors from Italy’s Lazio region, Pope Francis stressed the importance of these places of learning “in this particular historical moment,” saying they are entrusted “with a task of great responsibility.”

He told those gathered that the pandemic years, war in Europe, the global environmental issue, and the growth of inequalities, “challenge us in an unprecedented and accelerated way.”

“We have to tell ourselves the truth: we are in crisis,” said the Pope in off-the-cuff remarks.

But he added that being in a crisis can be a good thing because it “makes us grow.”

The danger, he pointed out, “is when the crisis turns into conflict: conflict is closed and destroys. But we must learn to live in crisis, as we do now, and to bring forward the young people who are [in]our universities, teaching them to live in crisis and to overcome crisis.”

The Pope underlined that young people “call us to our responsibilities,” which is why now is the time for a major educational investment.

“This is why the Global Compact on Education is being developed, a joint working project on a global scale, involving so many stakeholders, from major religions to international institutions, to individual educational institutions.”

Pope Francis also mentioned the signing of the document on human brotherhood in Abu Dhabi on 4 February 2019,  where it was agreed that “we care about an integral education that is summed up in knowing oneself, one’s brother, creation and the Transcendent”.

“This, in concrete terms, is the horizon of peace, which we rightly claim today and for which we pray intensely,” said the Pope.

He emphasised, that certainly, “there is much to be done, to ensure technological and scientific development, but also to guarantee human sustainability.”

“Great changes demand that we rethink our economic, cultural and social models, to recover the central value of the human person,” he said.

In this regard, Pope Francis underscored that the service that the university can provide is truly important, and offers an environment to “rethink and adapt our models of development, bringing together the best intellectual and moral energies.”

During his address to the university rectors, the Pope invited them to listen to their students and colleagues.

He also urged them to “listen to the social and institutional reality, the neighbouring one and the global one, because the university has no borders: knowledge, research, dialogue, and confrontation cannot but overcome all barriers and be all-embracing.”

He called on universities to continue to reach out and welcome students, researchers and teachers “who are victims of persecution, war and discrimination in various countries of the world.”

“I hope that yours will be living communities, transparent, active, welcoming, responsible communities, in a fruitful climate of cooperation, exchange and dialogue, valuing each and every one.”

In unscripted remarks to those gathered, the Pope warned against ideologies, saying that they destroy creativity and one’s heart because they only make us see one way and close off the universal panorama.

In conclusion, Pope Francis recalled the Jubilee of 2025 which has as its motto, “Pilgrims of Hope.”

The Pope expressed his hope that this event would offer the Church and universities a chance to work together towards shared goals of life, goodness and fraternity.

Pope to Mission Societies: ‘Be faithful, bold and creative’

Pope: ‘Dialogue especially with those who disagree with you’