Pope to Syro-Malabar youth: Walk along Jesus’ path of love 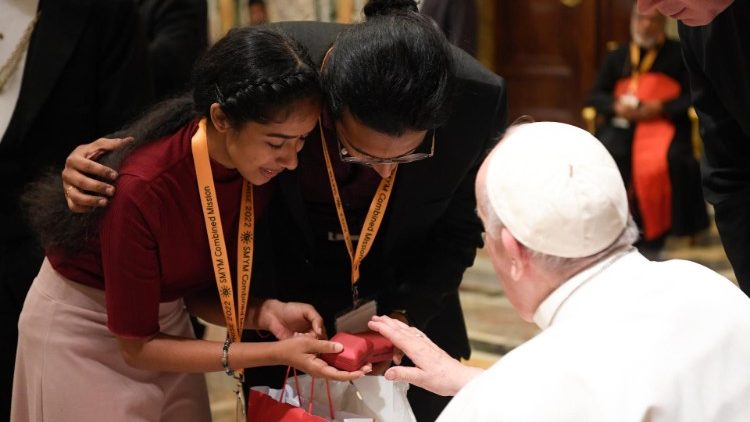 Pope Francis meets members of the “Syro-Malabar Youth Leaders Conference” during their pilgrimage to Rome, and encourages them to follow Jesus and be inspired by the example of Mary.

Meeting pilgrims of the “Syro-Malabar Youth Leaders Conference” on Saturday, Pope Francis invited them to follow Jesus by saying “yes” to a life of service and responsibility, and “no” to one of superficiality and dissipation.

Over half of them live in the Indian State of Kerala, where the Church dates back to the first century following the preaching of St. Thomas the Apostle and where the Church is still based.

Say ‘yes’ to a life of service and responsibility

Addressing some 75 young leaders of the various Syro-Malabar Eparchies of the diaspora and the Apostolic Visitation in Europe, Pope Francis noted that as Christians our wish is to follow Jesus and “walk along his path of love, the sole path that leads to eternal life.”

Though not easy, he said, this path “is exciting” and “gives meaning to our lives. It gives us the strength to say ‘yes’ to a life of service and responsibility, and ‘no’ to one of superficiality and dissipation.”

“In today’s ‘fluid’, even ‘frothy’ culture, our lives find substance and meaning whenever we say ‘yes’ to Jesus.”

Bear witness to the love given by the saints

Referring to the 1,950th anniversary of St. Thomas’s martyrdom, Pope Francis reminded the Syro-Malabar young leaders that the Church is apostolic “because she is founded on the testimony of the Apostles, and continues to grow not by proselytism, but by witness.”

He therefore called on them to bear witness to the love given by the saints in every age, primarily among their peers in the Syro-Malabar diaspora, but also among those who do not belong to their  communities, and even those “who do not know the Lord Jesus”.

Christianity is not a series of prohibitions

That love, Pope Francis noted, “shows – more than any words – that Christianity consists not in a series of prohibitions that stifle the desire for happiness, but in a life project capable of bringing fulfilment to every human heart.”

“Don’t be afraid to rebel against the growing tendency to reduce love to something banal, without beauty or genuine sharing and lacking in fidelity and responsibility.”

Step away from the “sofa” of comfort

Pope Francis further encouraged the young Indian pilgrims to follow Mary’s example, referring to the theme of next World Youth Day in Lisbon: ‘Mary arose and went with haste’, drawn from the Gospel of Luke in which the Mother of God  rushes to announce the Good News to Elizabeth.

He noted that “Mary did not allow herself to be paralyzed by pride or fear, after receiving the message of the angel.”

“Mary was not one of those people for whom all it takes to be comfortable and secure is a good sofa: ’couch potatoes’.”

Cultivate relationships with the older generations

He encouraged the young leaders to cultivate their relationships with their elderly relatives and make good use of their wisdom, emphasizing that the older generations play a crucial role in transmitting the faith.

[ If you, young people, want to make your own lives a canticle of praise, a gift for all humanity, you must be grounded in the tradition and prayer of past generations. ]

In conclusion, Pope Francis pointed out that Mary “teaches us also to live Eucharistically,” in other words to give thanks, to cultivate praise, and not to be fixated only on problems and difficulties.

“In the course of life, today’s fervent petitions become tomorrow’s prayers of thanksgiving,” he said.