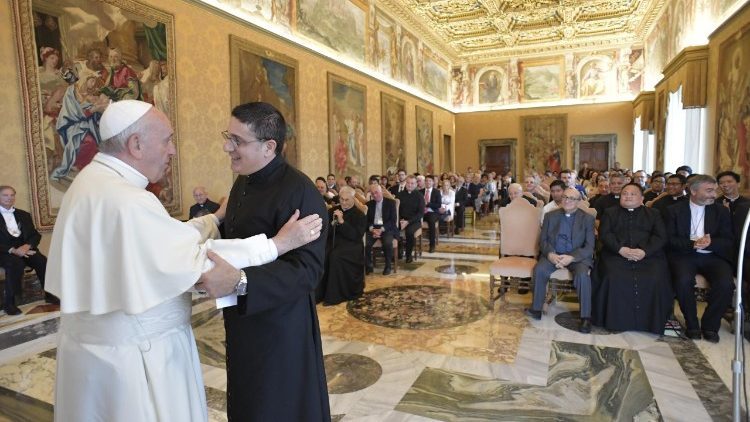 The Sons of Holy Mary Immaculate is a congregation which dedicates itself to youth education and the promotion of religious vocations. It is also active in missionary work.
The Pope met with the community on Thursday in the Vatican on the occasion of its convention, which is marking the 150 anniversary of the death of its founder Venerable Giuseppe Frassinetti.

Noting the vocational aspect of the congregation’s work, the Pontiff stressed that it was always God who calls, “but we can and must work together to create good soil where the overflowing seed of the call can take root and not be wasted.” He also added that, the Church was concerned with the aspect of formation in priestly and religious life.

In particular, Pope Francis focused on next month’s Synod of Bishops which has as its theme, young people, faith and vocational discernment. The Pope said, that in light of their important role in the promotion of religious vocations and youth education, this was an event where the congregation could be especially collaborative.

Recalling the work of the community’s founder and his friend Don Bosco in youth education, the Holy Father urged those gathered “to love the new generations, to be companions on their journey, which is sometimes confused but full of dreams…”

During his discourse the Pope encouraged the congregation to continue on their path of collaboration between clergy and laity which, he said, was one of the signs of the times of the Church today. He also invited them to live the commandment of Jesus, “to love one another” “as a true badge of your being Christians…”