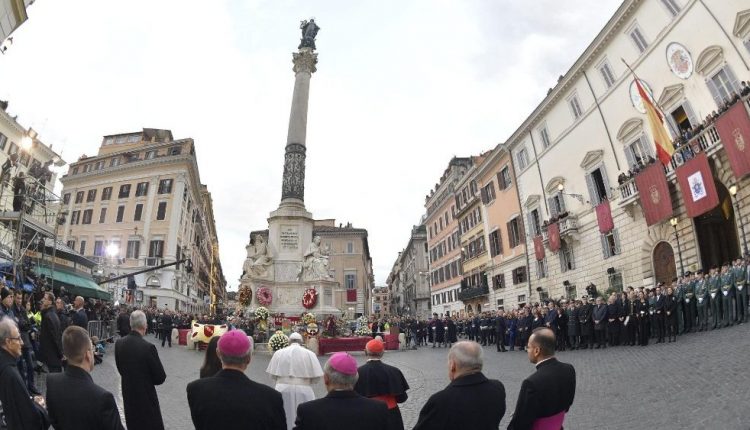 After leading the recitation of the Angelus prayer at midday in St. Peter’s Square on today’s Solemnity of the Immaculate Conception, Pope Francis will carry out his customary afternoon visit to the Basilica of Saint Mary Major to pray before the Salus Populi Romani icon. The icon of the Blessed Mother recalls how the people of Rome were saved from a deadly plague.

Salvation of the Roman People

The image is said to have been brought back from the Holy Land by St. Helena, mother of the Emperor Constantine. During the pontificate of Pope St. Gregory the Great, a plague spread throughout Rome, and the Pope carried the image in procession to pray for an end to the plague. When the plague finally ended, the Pope solemnly placed crowns of gold and gems on the heads of Mary and the Child Jesus in the miraculous image.

Following his prayer before the Salus Populi Romani icon, the Pope will proceed to Rome’s Piazza Mignanelli, close to the famous Spanish Steps, where the tall column crowned with a statue of the Blessed Mother can be found. There he will also spend some time in prayer with an act of veneration to Our Lady. Traditionally, the Pope places a bouquet of white roses at the base of the column and prays for her intercession to help all people in their suffering and struggles.

The afternoon visit to the Column of the Immaculate Conception for the December 8th act of veneration will be the Pope’s first public one in two years. In 2020 and 2021 he made visits there privately very early in the morning due to the pandemic and health safety rules in place to protect everyone.

The Solemnity of the Immaculate Conception celebrates the “singular grace and privilege” by which “the most Blessed Virgin Mary, in the first instant of her conception… in view of the merits of Jesus Christ, the saviour of the human race, was preserved from all stain of original sin.”

The dogma of the Immaculate Conception was believed by the Church from the very beginning, but was only formally defined in 1854 by Blessed Pope Pius IX. In 1857, a commemorative column was raised in Piazza Mignanelli, close to the Spanish Steps or Piazza di Spagna in Rome. The tradition of the Pope visiting the square on the feast dates back to 1953.

Pope: Peace is possible with God’s help and our goodwill