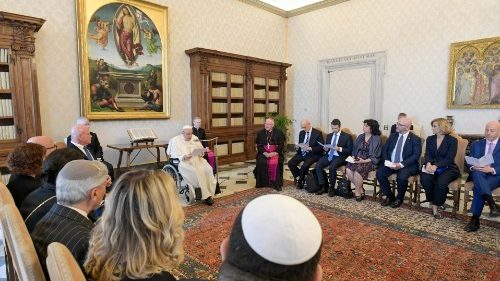 Meeting with a delegation from B’nai B’rith International, Pope Francis emphasizes the need to care for our sisters and brothers, inviting Jews and Christians to work together for the poor, for justice, and for the protection of creation.

“The promotion and deepening of Jewish-Christian dialogue has been something close to my heart since I was a young boy,” Pope Francis said on Monday morning, “because at school I had Jewish classmates; it is a dialogue made up of encounter and concrete gestures of fraternity.”

The Pope addressed his remarks to a delegation from B’nai B’rith International, a Jewish service organization committed to advocating for Jews around the world and promoting human rights.

Pope Francis highlighted the organization’s commitment to humanitarian causes, saying “people have a right to receive help and solidarity from the larger community,” including especially the right to hope.

“Helping the lowly, the poor, the sick… is the most concrete way to promote greater human fraternity.”

“Where is your brother?”

He contrasted remembrance to the “lying and indifference” that accompanies all violence, illustrated in the story of Cain’s murder of Abel.

“It is good that we should help one another, because in each one of us, in every religious tradition and in every human society, there is always a risk that we can hold grudges and foster disputes against others, and at times do so in the name of absolute and even sacred principles.”

The “strategy” of heaven, on the other hand, is “to break the cycle of violence, the spiral hatred, and to start protecting one another.”

Pope Francis expressed his hope that members of B’nai B’rith would continue their work of protecting the most vulnerable and neglected, saying this is something Jews and Christians can do together: “We can work for the poor, for peace, for justice, and for the protection of creation.”

“Let us strive ahead,” the Pope said in conclusion, “on the basis of our shared spiritual values, to defend human dignity against all violence, and to seek peace.”