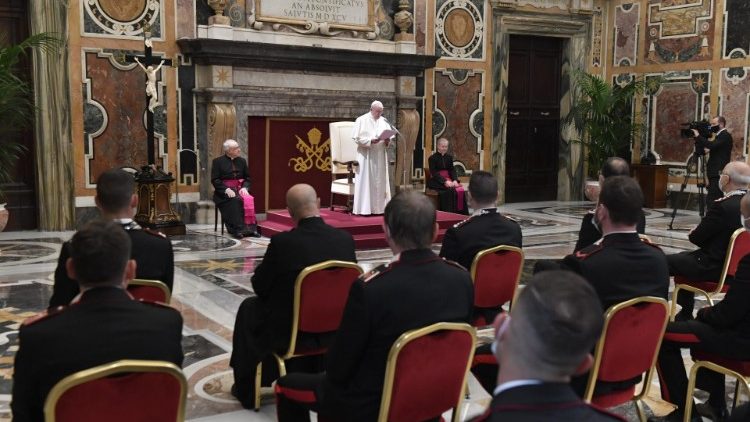 Everyone knows who the “Carabinieri” are with their dashing red-striped pants, scarlet lined capes, swords and tall red plumes on their hats!

It is to this national gendarmerie of Italy who primarily carries out domestic policing duties that Pope Francis expressed his gratitude and support on Saturday morning during an audience in the Vatican.

He expressed appreciation for the service rendered by the Carabinieri to the Holy See as they collaborate with other Italian and Vatican security and forces for public order.

“Your esteemed work around Vatican City enables the peaceful running of events that, throughout the year, attract pilgrims and tourists from all over the world,” he said, noting that theirs is “an activity that requires, on the one hand, the need to enforce dispositions, and on the other, patience and openness to the needs of others,” as well as a sense of sacrifice and duty.

Attention for the most fragile and disadvantaged

“In your work, around the Vatican, and in other areas of the city, you are called to pay special attention to those who are most fragile and disadvantaged, especially the elderly,” he said.

He upheld the good relationship that exists between this special force and citizens noting that when a person meets a ‘Carabiniere’, they know they can count on his help.

God, the Pope said, sees your hidden acts of service and “does not forget them!”

He encouraged all members of the corps to continue to be “promoters of responsible citizenship and guardians of the right to life,” through their commitment to safety and security, and he reminded them that in carrying out their profession, they must “always be aware that each person is loved by God, “and as such deserves respect.

The Pope concluded revealing to the Carabinieri that every morning, when he goes to his studio in the apostolic library, he prays to Our Lady and then he looks out of the window onto the city and the square:

“I see you at the bottom of the square and every morning I send you my heartfelt salute and thank you!”

Pope Francis to participate in international Prayer Meeting for Peace