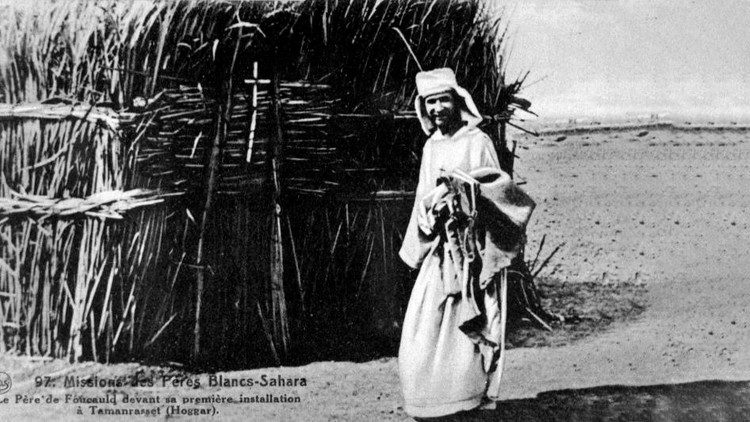 Pope Francis meets with men and women inspired by the charism of St. Charles de Foucauld, and praises the new Saint’s focus on the love of Christ for all people.

Just three days after declaring Charles de Foucauld a Saint, Pope Francis met with a delegation of the many women and men inspired by the French missionary’s life and charism.

Speaking to the Association of the Spiritual Family of Charles de Foucauld on Wednesday, the Pope called him a “prophet for our times, who knew how to highlight the essence and universality of the faith.”

The Saint discovered that truth by returning to Jesus’ hidden life at Nazareth, after he lived in Jesus’ hometown for a year.

“I encourage you, like Brother Charles, to continue to envision Jesus walking in the midst of people, patiently carrying out a difficult job, and living day-to-day in a family and a city.”

Love as the essence of faith

Pope Francis said it must please the Lord to see men and women imitate St. Charles along “the path of littleness, humility, and solidarity with the poor.”

He added that the French missionary discovered the essence of the faith, which he wrote was that “God gives primacy of place to love and then to sacrifice inspired by love and obedience derived from love.”

The Pope urged the Church to return to the “essence of the faith, not to get lost in secondary things and risk losing sight of the pure simplicity of the Gospel.”

Saint Charles de Foucauld, added the Pope, also focused on the universality of faith, living Christianity as a brother to all, especially during his 15 years in the Sahara Desert of Algeria.

“He did not have the objective of converting others, but only of living in the gratuitous love of God, carrying out an ‘apostolate of goodness’.”

The new Saint sought to have “Christians, Muslims, Jews, and idolaters” consider him their brother by opening the doors of his house to all people.

Pope Francis thanked the men and women inspired by St. Charles de Foucauld for helping spread his spirituality and openness, “especially in a time like ours in which we risk closing ourselves off, increasing distances, and losing sight of our brothers and sisters.”

The Pope concluded his speech by inviting the group to focus on St. Charles’ joy, “because joy is the purest witness that we can offer to Jesus in every place and time.”