Pope Francis’ struggle to bring forth a synodal Church 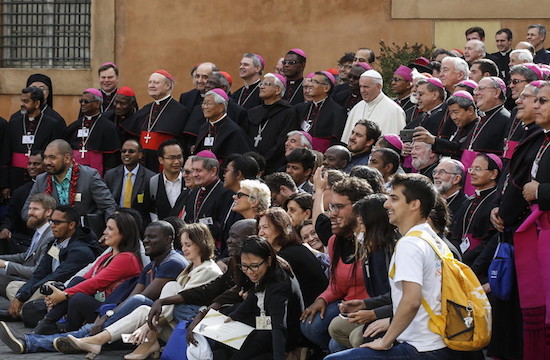 The most visible critique of the just concluded Synod of Bishops’ assembly on young people has focused on sections in the final document that call for a strengthening of synodality at all levels of the Church.

It is absolutely surprising how very little so many bishops know about synodality, a method Pope Francis has sought to develop throughout his pontificate and a concept Catholic theologians have been discussing for at least a couple of decades.

In order to understand how the pope’s ecclesiology is currently being received, we should look back at the concept of episcopal collegiality as it was introduced at the Second Vatican Council (1962-65).

It is well known that this was a “new” concept for the Council Fathers, who debated and finally approved by principle most notably in the Constitution on the Church, Lumen Gentium, which was promulgated in November 1964.

Less known is that Catholic theologians had done substantial work in collegiality during the preparation phase of Vatican II. One notable example was the 1961 book edited by Yves Congar and Bernard-Dominique Dupuy, The Episcopate and the Universal Church.

During the actual sessions of Vatican II other theologians and historians published even more books and scholarly articles on the topic.

These were fundamental in convincing the bishops council at both ends of the spectrum that episcopal collegiality was not, in fact, some novelty, but part of the Church’s deeper tradition.

Giuseppe Alberigo argued that it was rooted in fidelity to the principle of ressourcement in his book on the history of the doctrine of power in the universal Church. Though the text was published in Italian in 1964, it was already available to Council Fathers a year earlier during the second session of Vatican II.

A similar exchange between theology and magisterium is currently underway regarding ecclesial synodality.

But it is happening to a much lesser extent and in a Church that is more ideologically and geographically fragmented. This is a result of the growing gap between theologians and Church leaders, especially because of a weakness within English-speaking theology.

A search for the word “synodality” in titles offered by the most popular online booksellers produces a mere handful in English. And only a couple of these deal with synodality in the Catholic Church.

But the situation is very different in other languages — such as French, German, and Italian — where theological reflection on synodality in the Catholic Church has been going since before Francis even became pope.

Since these works are older and more abundant, synodality is not so problematic and less “novel” for theologians and Church leaders.

This uneven reception of Pope Francis’ contribution to synodality is remarkable considering it is one of the key ecclesiological insights of his pontificate, already elaborated in several substantial documents.

They include the pope’s speech in October 2015 to mark the 50th anniversary of the institution of the Synod of Bishops; the publication in March 2018 of the International Theological Commission’s text on synodality in the life and mission of the Church; and the publication in September 2018 of the apostolic constitution Episcopalis Communio, which further defines and makes changes to the Synod of Bishops.

Additionally, there is also the new instruction, published past October, that lays down the procedures to be followed at the Synod assemblies and delineate the responsibilities of the Synod’s general secretariat.

Even more importantly, there is the experience of preparing and celebrating the two assemblies on marriage and the family in 2014 and 2015 – in my opinion, the most important moment for understanding this pontificate from an ecclesiological and institutional point of view.

But the lack of reflection on synodality in some areas of global Catholicism is contributing to confusion and misunderstanding of the current shift from a Church governed by episcopal collegiality to a Church in a process of reform towards synodality.

While ecclesial synodality is based on episcopal collegiality, the terms are not synonymous.

First, episcopal collegiality gives voice to the bishops alone, while synodality seeks to give voice to the entire People of God – meaning other components of the Church (especially women) but also the peripheries of our world and of the Church.

Second, episcopal collegiality – as it was formulated by Vatican II – left a lot of discretion to the Bishop of Rome to choose whether and when he would act collegially. But Francis talks about synodality as a fundamental dimension of being Church that cannot find expression only in events celebrated at the Vatican.

Third, the teaching and actions of the popes in the post-Vatican II period framed collegiality in a way that protected the power of the Roman Curia, both theologically and in practice.

But in the last five-and-a-half years Francis has begun to change that.

He is expected to articulate the precedence the Synod of Bishops (and synodality) has over the Church’s central bureaucracy when he issues the forthcoming apostolic constitution on the reform of the Curia.

Synodality for Francis is not just a form of Church government, but a way of being Church. It requires not only changing institutions, but also changing an entire mindset. There is a whole agenda that is still being drafted and will require a long time to be addressed.

Naturally, there are problems that will need to be resolved.

First of all, it is not clear how much ecclesial synodality an institution like the Synod of Bishops (conceived in 1965 as an instrument of episcopal collegiality and dependent on papal primacy) will be able to bear.

Secondly, a truly synodal Church cannot assume that all participants at synodal events in Rome are fluent in Italian. Italian should not become the new Latin.

Thirdly, synodality needs synodal experience at the universal level, but it must also happen at the national and local level.

In this sense, Francis is opening the way towards synodality while, at the same time, he is trying to heal the wounds that the policies and practices of his previous two predecessors inflicted on episcopal collegiality.

In the early post-Vatican II period there was a wave of local synods and council that came to a stop at the end of Paul VI’s pontificate.

The decadence of the conciliar and synodal life of the Church after Vatican Council II is similar to what happened in the period after the Council of Trent (1545-1563).

The only difference is that it happened much more quickly, given that local conciliar and synodal activity in the Tridentine period remained quite vital until the mid-to-late 18th century.

In one sense, the Second Vatican Council was just a brief pause in more than two centuries of anti-synodal sentiment typical of Ultramontanism. And this is what Francis is up against.

The Jesuit pope’s ecclesiology of synodality casts a light on his deep insight into the Church of today.

His push for a different way of governing and being Church shows his intention and attempt to hold together opposing currents — maintaining an institutional structure in a Catholic culture that tends more and more to become not just post-clerical, but also post-ecclesial and post-Church; listening to the sensus fidelium of the whole People of God while preserving the role of discernment for those in leadership positions; and promoting the episcopal collegiality of Vatican II with ecclesial synodality in an age when the Barque of Peter is also rocked by populism and demagoguery.

But even more importantly, synodality is a necessary response to the pre-global paradigm of ecclesial governance.

The Catholic Church is today much bigger and much more diverse than in the 1960s.

It has become more and more urgent to find a way to deal with conciliarity in a global Church where it is hard to imagine — if for nothing more than logistical reasons — the calling of a another ecumenical council limited only to bishops like that of Vatican II.

The idea that conciliarity based on episcopal collegiality is showing its limits is one of the strongest taboos in the official teaching of the Catholic Church today. It is no surprise that it is a Jesuit who has found the courage to address it.