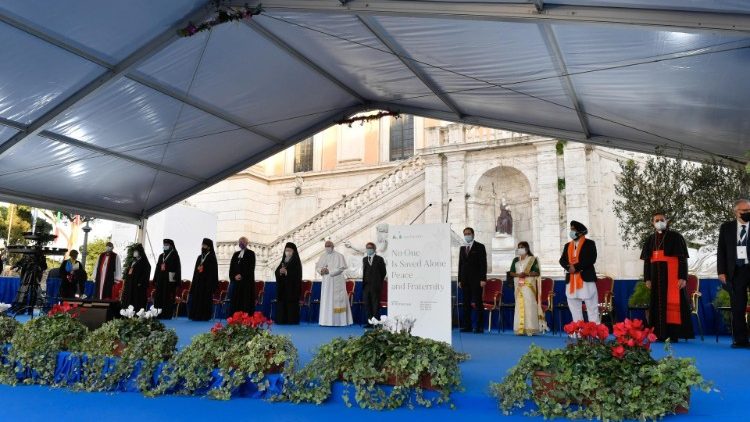 Pope Francis is inviting leaders of other faiths to work together “with the gentle strength of faith to end all conflicts.” His appeal comes as part of his discourse at an International Meeting for Peace, held in Rome and organized by the Community of Saint Egidio, entitled “No one is saved alone. Peace and Fraternity.”

Pope Francis set the tone of his speech on Tuesday by recalling the historic Assisi Meeting desired by Saint Pope John Paul II on 27 October 1986, in which for the first time in Church history the Pope invited leaders of other religions to join him in prayer for peace for the human family.

That meeting, he said, contained a prophetic seed “that by God’s grace has gradually matured through unprecedented encounters, acts of peacemaking and fresh initiatives of fraternity.”

He noted that since that Meeting many painful events have taken place, at times in the name of religion, but that we also acknowledge the fruitful steps undertaken since then in interreligious dialogue.

“This is a sign of hope that encourages us to continue cooperating as brothers and sisters,” he said, recalling the Document on Human Fraternity for World Peace and Living Together, which he signed with the Grand Imam of Al-Azhar, Ahmad Al-Tayyeb, in 2019.

Pope Francis also referred to his just-released encyclical, Fratelli tutti, in which he reiterates that “the commandment of peace is inscribed in the depths of the religious traditions.”

Religions at the service of peace and fraternity

“Believers have understood that religious differences do not justify indifference or enmity. Rather, on the basis of our religious faith we are enabled to become peacemakers, rather than standing passively before the evil of war and hatred,” he said.

For this reason, he continued, this gathering is an encouragement “to religious leaders and to all believers to pray fervently for peace, never resigned to war, but working with the gentle strength of faith to end conflicts.”

“We need peace!  More peace! We cannot remain indifferent,” the Pope appealed, noting that the world has a profound thirst for peace.

Indifference and the pandemic aggravating the evil of war

In many countries, people are suffering due to wars, he said, and there is the risk that in political life and public opinion we grow inured to the evil of war as if it were simply a part of human history.

Quoting again from Fratelli tutti, the Pope said “Let us not remain mired in theoretical discussions, but touch the wounded flesh of the victims… Let us think of the refugees and displaced, those who suffered the effects of atomic radiation or chemical attacks, the mothers who lost their children, and the boys and girls maimed or deprived of their childhood”.

All this pain, he continued, is aggravated by the suffering caused by the coronavirus and the impossibility, in many countries, of access to necessary care.

Peace is the priority of all politics

The Pope said those who hold political responsibilities have the solemn duty, before God, to put an end to war: “Peace is the priority of all politics.”

He recalled the words Jesus spoke to Peter: “Put your sword back into its place; for all who take the sword will perish by the sword.” He added that those who perpetrate violence possibly, but erroneously, believe that it will resolve difficult situations quickly.

“Enough!” was Jesus’ unambiguous response to any form of violence, the Pope said, highlighting how “That single word of Jesus echoes through the centuries and reaches us forcefully in our own time: enough of swords, weapons, violence and war!”

We can only be saved together

Pope Francis said the dream of all men and women of goodwill is for a world rid of every war. But how do we go about, he asked, achieving this dream?

“No people, no social group, can single-handedly achieve peace, prosperity, security and happiness,” he said, noting that the lesson learned from the coronavirus pandemic is “the awareness that we are a global community, all in the same boat, where one person’s problems are the problems of all.”

“Once more we realized that no one is saved alone; we can only be saved together.” (cf. Fratelli tutti, 32).

All of us, the Pope said, peoples, communities, government leaders and international organizations must realise that we are a single human family and that “we can only be saved together through encounter and negotiation, setting aside our conflicts and pursuing reconciliation, moderating the language of politics and propaganda, and developing true paths of peace (cf. Fratelli tutti, 231).

Pope Francis concluded his speech noting that all the persons of different religious traditions, gathered together at the Capitoline Hill, are sending a message of peace: “To show clearly that the religions do not want war and, indeed, disown those who would enshrine violence.”

And asking everyone to pray for reconciliation and to strive to enable fraternity to pave new paths of hope, he expressed his firm belief that “With God’s help, it will be possible to build a world of peace, and thus to be saved together.”

Pope at Prayer Meeting: Love alone is path to peace and communion