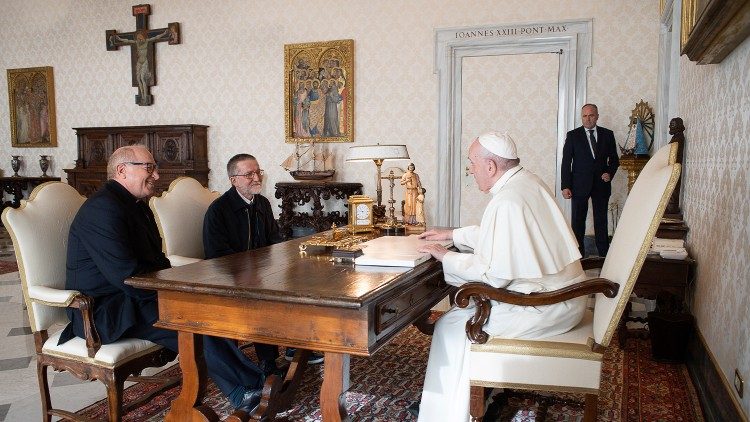 Pope Francis on Monday received in audience Italian priest Father Pierluigi Maccalli, who was released on October 8, two years after jihadist militants abducted him along with others in Niger on September 17, 2018.

By Benedetta Capelli and Gabriella Ceraso

Father Pierluigi Maccalli appeared visibly moved after Monday’s meeting with Pope Francis, who had prayed for him along with the Church.  “Thank you” were the only words that the 59-year-old missionary from the periphery managed to utter, overwhelmed by the Pope’s gesture.

A member of the Society of African Missions, originally from the northern Italian town of Madignano, Father Maccalli relived his ordeal as he recounted it to Pope Francis, and offered it for his beloved African community in Niger where he worked.

“I was moved, I told the Pope what I went through and entrusted to his prayers especially the communities I visited and that have been without a priest or a missionary for over 2 years,” he told Vatican News.  “I asked the Pope to remember the Church of Niger in his prayers,” he said during the interview that took place soon after the papal audience.

The Pope, he said, listened keenly.

A missionary from the periphery

Father Maccalli recalled the applause the Holy Father asked for from those in St. Peter’s Square, when he announced the good news of the missionary’s release at the end of his midday

The priest thanked the Pope who replied: “We supported you but you supported the Church.” “At this,” Father Maccalli said, “I had no words: I, a little missionary, and he who said this to me … I really have no words.”

Father Maccalli described the Pope’s embrace like that of a father, whom he carries in his prayers every day.  “To find myself in front of him was truly an emotion and a feeling of great gratitude,” he told Vatican News. “I never thought that a missionary who goes to the peripheries of the world could one day find himself before the Pope himself, the leader of the universal Church.”

More than the Pope’s words, it is his gesture that the missionary said he will treasure in his heart forever.  “When we said goodbye, I shook his hand and he kissed my hands. I didn’t expect it…!” Father Maccalli said.

Thinking back to his captivity, he said, “Tears were my bread for many days and were my prayer when I didn’t know what to say.”  One day, he recalled a rabbi’s words who said that God counts the number of women’s tears.  Father Maccalli said he then prayed: “Lord, who knows whether you also count men’s tears… I offer them to you in prayer to water that arid mission land but also the arid of hearts of those who hate and cause war and violence.”

Speaking about the basic needs to survive in the desert, the Missionary of Africa said it is essential to have water to drink, to have something to eat, even if it is the same food every day, such as onions, lentils and sardines.  It is not the sought-after dishes that matter, he added: “It is the same in spiritual life.”

“What matters is shalom [peace], forgiveness and brotherhood, and as a missionary,” Father Maccalli concluded, “I now feel an even greater urge to be a witness of peace, brotherhood and forgiveness, today and always.”

Order of Malta elects Lieutenant of the Grand Master