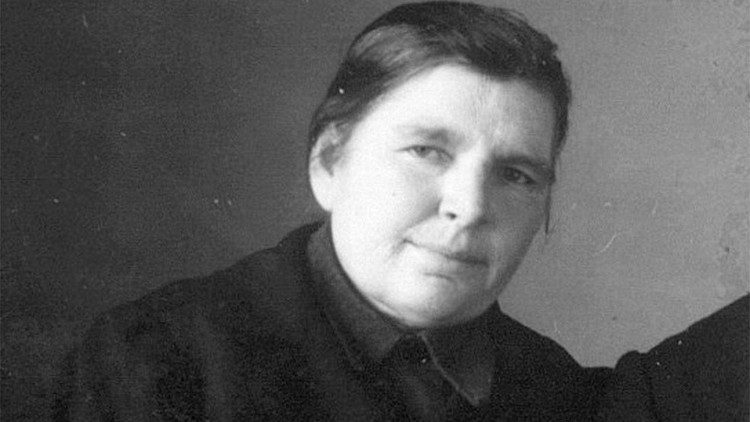 In his address to Kazakhstan clergy on Thursday morning, Pope Francis held up the example of Gertrude Detzel – a Russian-German lay woman in the process of beatification – who “brought the love of Christ to the world” despite living in a time of great Christian persecution.

From a respected Russian-German family from the North Caucasus region in Eastern Europe, she was deported to Kazakhstan in 1941 for forced labour, just like so many other Russian-Germans at the time.

Because she did not hide her faith, she was arrested in 1949 and sent to a Communist labour and re-education camp called “Tschemolgan village” in the area of present-day Almaty, Kazakhstan.

“What I see in Gertrude’s life is a deep faith – and enormous courage,” says Bishop Adelio Dell’Oro of Karaganda, who opened her beatification process last autumn.

“Because wherever she was, even in the camp, she was not afraid to live the faith and to witness it to everyone. She often annoyed the camp leaders because she spoke to everyone about God and the faith. On Sundays, she organised joint secret prayers, Catholics and Lutherans together. All this was so attractive that people went to her and followed her.”

Bishop Dell’Oro spoke with many individuals who knew Gertrude Detzel herself and is currently interviewing others.

He is also interviewing people in Germany, because that is where many German-speaking Kazakhs moved to after 1991.

They can also testify to episodes like this about the Servant of God Detzel:

“When Gertrude was woken up at night and interrogated, she was not afraid to speak to the camp director. It went so far that he stopped the whole thing at some point, called the guard and said, ‘Take her back to the barracks. Because I’m almost starting to believe it myself!'”

After Stalin’s death in 1953, prisoners began to be released. And there is a story that says Gertrude should have been among the first to go. “Why? So that those who stayed would not come to faith in the concentration camp through her testimony.”

Continuing to live in faith

Gertrude Detzel was not really set free, however.

She was taken to a German “special settlement” near Semey, Kazakhstan, which was under strict supervision. Even going outside was forbidden.

But that did not bother the Catholic woman who was on fire for her faith.

With her sister, Walentina, she secretly went to the neighbouring villages where other Germans lived. They went from house to house, baptizing children and adults and giving them hand-written prayers. If the sisters had been discovered, it would have meant 20 more years of forced labour.

When the special settlement was abandoned, Gertrude moved to the city of Karaganda at the end of the 1950s. Unmarried by choice, she became a member of the Third Order of St Francis. And she organised the spiritual life of the numerous exiles.

“In the Soviet Union, the Catholic faith was passed on for 60, 70 years almost without priests, because they had been deported to the camps,” explains Bishop Dell’Oro. “And so the faithful were without sacraments for decades, except for baptism, which brave women administered to children.”

A gifted and brave preacher

This is exactly what Gertrude Detzel did. She secretly gathered the faithful to recite the Rosary and Sunday Mass, explained the Bible to them and introduced them to the Saints.

Gertrude had, as witnesses testified, the gift of preaching.

“It is thanks to her that whole generations of exiled Catholics were able to live the sacraments under conditions of persecution of the Church,” explains a booklet for the beatification of Gertrude written by Bishop Dell’Oro. “In difficult times for the Church, Gertrude Detzel substituted as a priest for the people.”

A determined and joyful witness of faith

That is precisely why the Bishop of Karaganda – the place where Gertrude Detzel died in 1971 and where her grave is – cares so much about this beatification.

He sees in this determined and joyful witness of faith a model for the laity in Kazakhstan today, in a country where the Church is in danger of being reduced in numbers due to the exodus of many believers to the West.

In this situation, it is the Kazakh laity who today – as the Bishop says – just like Gertrude Detzel back then, have the mission to carry on the faith.

The mission to carry on the faith in their own way, differently and, perhaps, better, because they are  freer than the priests.

“What the figure of Gertrude suggests to us for today is to live the faith, to be open to all, for example also to Muslims. Because faith is not transmitted because we shout ‘Jesus, Jesus!’, but through our humanity. Here in Kazakhstan, we cannot do anything as a church in society; this concerns all religions. We are only free behind our church walls. That is why laypeople are important: no one prevents them from being witnesses where they work, where they study. So we need laypeople to be witnesses in society today, to be alive and to be open, to meet everyone and leave everything to the grace of God and the freedom of the individual.”