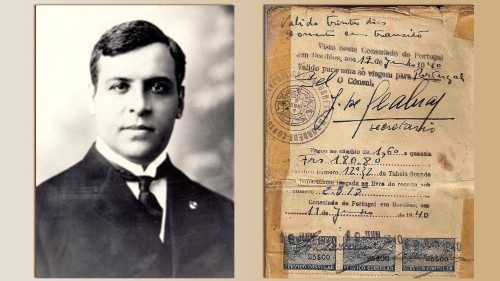 Pope Francis: Freedom of conscience must be respected always and everywhere

Marking the Day of Conscience, inspired by the witness of Portuguese diplomat Aristides de Sousa Mendes, Pope Francis appeals that freedom of conscience be respected always and everywhere.

During his General Audience on Wednesday, Pope Francis recalled that June 17 marks the “Day of Conscience”.

The day was inspired by the testimony of Portuguese diplomat Aristides de Sousa Mendes, who, eighty years ago, decided to follow his conscience, and in doing so, saved the lives of thousands of Jews and many others who were being persecuted.

In his words on Wednesday, the Pope appealed that “freedom of conscience always and everywhere be respected”.  “May every Christian”, he said, “give an example of the consistency of an upright conscience enlightened by the Word of God.”

Aristides de Sousa Mendes’s act of conscience was deeply embedded in his Catholic faith. It led him to disregard the direct orders of his government to help those in need.

During the Second World War, de Sousa Mendes, despite knowing the consequences he would face for his actions, issued visas to all refugees regardless of nationality, race, religion, or political opinions.

“I could not have acted otherwise”

This sense of humanity and courage led to his ostracization from the world in which he had lived. He was unable to continue his job as a diplomat and was forbidden from earning a living in order to support his family. His children, too, were prevented from finding gainful employment.

He spent the rest of his life trying to clear his name but was ignored by the Portuguese political regime at the time.

Aristides de Sousa Mendes died in poverty on April 3rd, 1954 at the Franciscan Hospital in Lisbon. But even at the end of his life he knew his actions had been justified in saving thousands of innocent lives. As he put it himself, “I could not have acted otherwise, and I, therefore, accept all that has befallen me with love.”