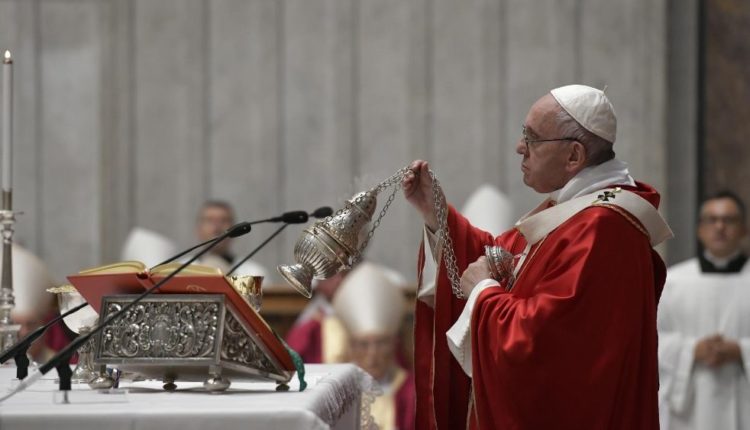 8 Cardinals and a Patriarch passed away over the last year. And 154 Bishops from nearly 40 countries. All of them were remembered by Pope Francis at a Requiem Mass celebrated in St Peter’s Basilica, at the Altar of the Chair, on Saturday morning.

Going out to meet the Bridegroom

In his homily, the Pope took inspiration from Jesus’ parable of the Ten Bridesmaids, as recounted in St Matthew’s Gospel, who “go out to meet the Bridegroom”. Pope Francis drew a parallel between this “going out” and our own lives which, he said, are a “constant call to go forth” – from the womb to the tomb. We are always on the move, he added, “until we make our final journey”. Pope Francis described our life as a constant preparation for the wedding banquet, for meeting Jesus, the Bridegroom. This is the encounter that alone “gives meaning and direction to our lives”, he said.

Not the lamps but the oil

Commentaries on this Gospel often focus on the lamps carried by the ten bridesmaids. When the lamps of the five foolish bridesmaids go out, the door is closed and they are refused entry to the hall. Pope Francis, instead, turned his attention to what the lamps contain: the oil. He examined three characteristics of oil which he then applied to us and to how we should live our lives.

Oil is not impressive

Oil is not an impressive substance, he said: “It remains hidden, yet without it there is no light”. The Pope invited us to detach ourselves from worldly appearances, to say no to what he called the “cosmetic culture” that has us obsessing over how we look. Outward appearance passes away, he reminded us. What is important is to “keep custody of our inner self, which is precious in the eyes of God”.

Oil must be consumed

Oil gives light only when it is burned, said the Pope. Our own lives radiate light only if they “spend themselves in service”. “Service”, said Pope Francis, “is the ticket to be presented at the door of the eternal wedding banquet”. Serving others, he continued, comes at a cost: “it involves spending ourselves, letting ourselves be consumed”.

Oil must be prepared

Oil must be stored and prepared ahead of time, concluded the Pope. So we too must prepare “right here and now”. Those called to God’s wedding feast cannot be content with a “flat and humdrum life that plods on without enthusiasm”, he said. Such a dreary and predictable life that fails to give of itself, said pope Francis, “is unworthy of the Bridegroom”.

Pope Francis: Life is a constant call to go forth