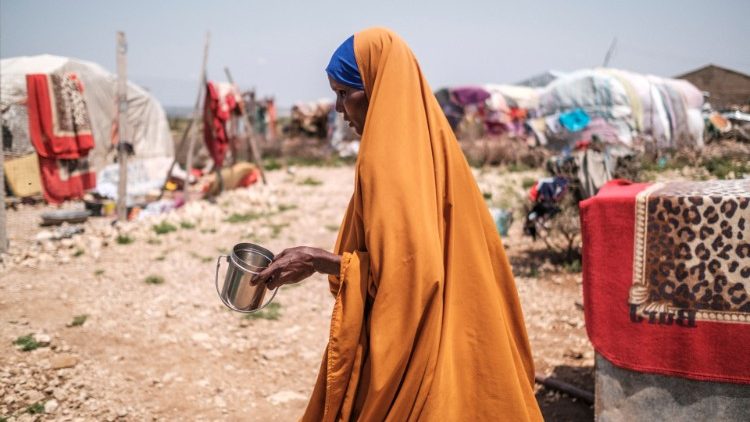 At the end of the recitation of the Angelus, the Pope’s thoughts turn to the population of Somalia and neighbouring countries, grappling with a serious humanitarian crisis also linked to an unprecedented drought.

Following the recitation of the Marian Prayer on Sunday, Pope Francis drew attention to “the serious humanitarian crisis affecting Somalia and parts of neighbouring countries.”

The Pope emphasized that “the populations of this region, already living in very precarious conditions, are now in mortal danger from drought.”

“I hope that international solidarity can respond effectively to this emergency. Unfortunately, war diverts attention and resources, but these are the objectives that demand the greatest commitment: the fight against hunger, health, education,” he said.

Aid agencies have also sounded the alarm, with the Food and Agriculture Organization (FAO) saying that famine could set in in eight regions of Somalia by September if crop failures and lower livestock production continue.

According to the UN refugee agency UNHCR and the Norwegian Refugee Council (NRC), more than 755,000 people have been internally displaced in Somalia because of the severe drought this year, bringing the total figure to 1 million people since January 2021 when the drought began.

“This 1 million milestone serves as a massive alarm bell for Somalia,” said Mohamed Abdi, NRC’s Country Director in Somalia. “Starvation is now haunting the entire country. We are seeing more and more families forced to leave everything behind because there is literally no water or food left in their villages. Aid funding urgently needs to be ramped up before it is too late.”

After the Angelus the Pope also had a special thought for the many pilgrims gathered Sunday at the Shrine of Divine Mercy in Krakow, where twenty years ago St John Paul II made the Act of Entrustment of the world to Divine Mercy.

“More than ever we see today the meaning of that gesture, which we wish to renew in prayer and in the testimony of our lives. Mercy is the way of salvation for each of us and for the whole world. And we ask the Lord, special mercy, mercy and pity for the tormented people of Ukraine,” he said.