Pope: Communicating with the heart can curb escalation of war 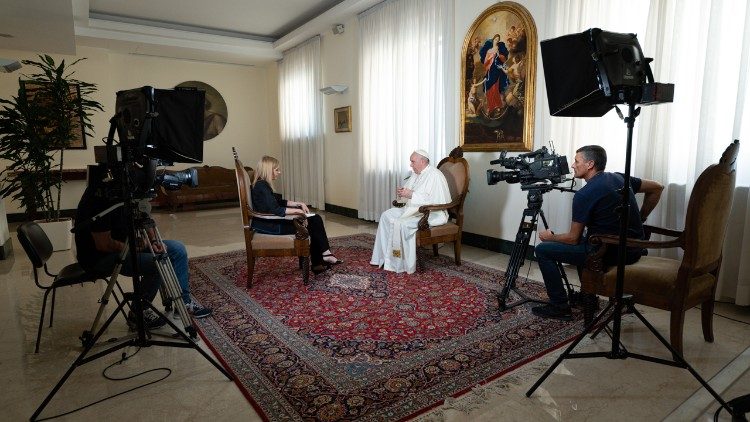 The Vatican publishes Pope Francis’ Message for the 57th World Day of Social Communications, observed the Sunday before Pentecost, on the theme “Speak with the heart: Veritatem facientes in caritate” (Doing the truth in charity).

Pope Francis has appealed to communicators to always speak from the heart, and find the right words to build a better civilization.

The Holy Father did so in his Message for the 57th World Day of Social Communications, published on 24 January, the Feast of St. Francis De Sales, the patron saint of journalists, on the theme “Speak with the heart: Veritatem facientes in caritate” (Doing the truth in charity).

The World Day of Social Communications will be observed by the Vatican and Dioceses around the world on the Sunday before Pentecost, which falls this year on 21 May.

This year’s theme connects with that of 2022, titled “Listen with the ear of the heart.”

Touching even the most hardened hearts

In a world that “so inclined towards indifference and indignation, at times even on the basis of disinformation which falsifies and exploits the truth,” the Pope says it is particularly important there is space for proclaiming the truth, “even if at times it is uncomfortable.”

The Pope calls for words capable of doing good for others and of touching even the “most hardened of hearts.”

He exhorts communicators, even in our dramatic global climate, to convey the “gentle strength of love.”

While the message is primarily geared toward those working in communications, the Pope highlighted that everyone has the responsibility to communicate “with an open heart and arms.”

Benedict XVI: ‘A heart that sees’

Recalling the importance of “hear” when communicating, the Holy Father cited late Pope Emeritus Benedict XVI who had said, “The Christian’s project, taken from Jesus’ teaching, is ‘a heart that sees’ where love is needed and acts appropriately.”

Pope Francis recalled Jesus’ heartfelt dialogue with the disciples on their way to Emmaus, noting He speaks with love, and accompanies and respects them.

“In a historical period marked by polarizations and contrasts — to which unfortunately not even the ecclesial community is immune — the commitment to communicating “with open heart and arms” does not pertain exclusively to those in the field of communications; it is everyone’s responsibility.”

We all must seek and speak the truth, charitably, the Pope insisted.

The Holy Father warned of communications that promote toxic relationships and hatred, and instead called for those which curb these dangerous attitudes.

In the message, the Pope praised the patron saint of Catholic journalists, St. Francis De Sales, for offering communicators a worthwhile example.

This Doctor of the Church, who was Bishop of Geneva in a time of heated disputes, the Pope said, showed great “humanity” and willingness to dialogue patiently with everyone.

The fact that he dialogued patiently even “with those who disagreed with him,” the Pope said, “made him an extraordinary witness of God’s merciful love.”

For the saint, the Holy Father said, communication was a “reflection of the soul” and a manifestation of love.

St. Francis De Sales, the Pope continued, shows “we are what we communicate,” and offered a witness of going “against the grain” when communication was often “exploited so that the world may see us as we would like to be and not as we are.”

The Pope looked again at the context of the global conflict we are experiencing and reiterated how necessary “a form of communication that is not hostile” is to promote a “culture of peace,” capable of overcoming hatred and enmity.

The escalation of war that humanity fears today, Pope Francis wrote, “must be stopped as soon as possible, also at the level of communication” because words often turn into warlike actions of heinous violence.”

He added, “We need communicators who are open to dialogue, engaged in promoting integral disarmament, and committed to undoing the belligerent psychosis that nests in our hearts.”

This, he said, “is why all belligerent rhetoric must be rejected, as well as every form of propaganda that manipulates the truth, disfiguring it for ideological ends. Instead, what must be promoted is a form of communication that helps create the conditions to resolve controversies between peoples.”

The Holy Father concluded his message with a prayer for journalists, and for all who communicate, that Jesus might “help us to make our communication clear, open and heartfelt… help us listen to the beating of hearts, to rediscover ourselves as brothers and sisters, and to disarm the hostility that divides” and “help us speak the truth in charity, so that we may feel like protectors of one another.”