Pope: Church’s mission to show love to refugees has no limits 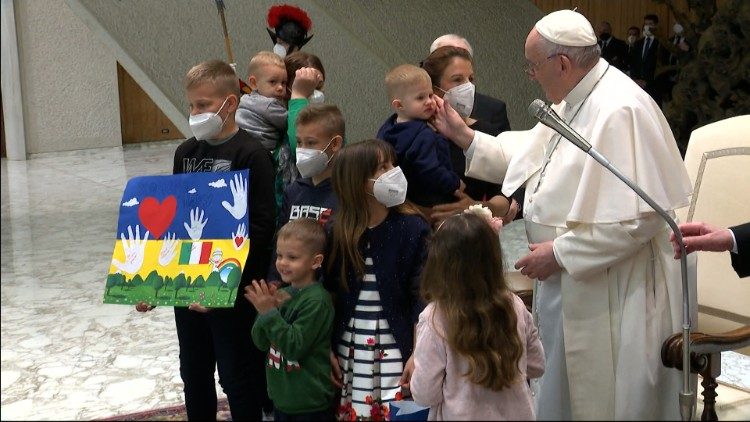 The need to assist all forced to flee in the midst of a world wrought with war and crises was at the center of a press conference presenting Pope Francis’ Message for the 108th World Day of Migrants and Refugees, 25 September, on the theme “Building the Future with Migrants and Refugees.”

The Church’s mission to show love and be at the side of refugees and migrants worldwide has no limits.

This was highlighted during the press conference presenting Pope Francis’ Message for the 108th World Day of Migrants and Refugees, held in the Holy See Press Office on Thursday.

The World Day will be observed on Sunday, 25 September 2022, on the theme “Building the Future with Migrants and Refugees.”

“Building the Future with Migrants and Refugees”

Those giving interventions on the message were: Fr. Fabio Baggio, C.S., under-secretary of the Dicastery for Promoting Integral Human Development with responsibility for the Section for Migrants and Refugees and Special Projects; Dr. Pascale Debbané, an official of Lebanese origin of the same Section for Migrants and Refugees; and Cardinal Francesco Montenegro, a member of the same Vatican Dicastery.

During the press conference, a video of the Holy Father for the campaign in preparation of the 108th World Day of Migrants and Refugees was revealed, which emphasized the need to welcome, love and promote migrants and refugees, and value their enrichment to society.

Taking care of refugees and migrants has always been a key theme of Pope Francis’ pontificate. He has consistently emphasized the need to welcome, protect, promote and integrate them.

Vice-Director of the Holy See Press Office, Cristiane Murray, before presenting the speakers, pointed out how at these times, the migration phenomenon is especially poignant.

Fr. Fabio Baggio underscored the Church’s closeness to all refugees and migrants worldwide, in all circumstances.

“In a world deeply marked by the pandemic crisis and by old and new humanitarian emergencies, Pope Francis vigorously reaffirms the common commitment to build a future that responds more and more to God’s plan, a future of peace and prosperity, the Kingdom of God,” he said.

The Holy Father, Fr. Baggio recalled, says the future must be built “with” migrants and refugees, “as well as with all the inhabitants of the existential peripheries, with the discarded and marginalised, so that no one remains excluded.”

“This inclusion is a ‘conditio sine qua non’ because ‘without them it would not be the Kingdom that God wants.’”

“Building with,” Fr. Baggio stated, also means “recognising and promoting the contribution of migrants and refugees to this construction work, because only in this way can a world be built that ensures the conditions for the integral human development of all.”

For the Holy Father, “‘building the future’ is an imperative that is expressed in the first person plural,” he said. “It is a duty and a commitment of all and everyone that must begin immediately ‘Because the future begins today and it begins with each of us.'”

“There is no time to lose if we really want God’s plan for the world to be realised.”

A personal recollection of healing

Dr. Pascale Debbané discussed how she has lived this reality of migration in the first person.

During the war, the Lebanese-born Vatican official shared, “my family had to migrate to Canada.” She noted that they received a warm welcome and were quickly integrated into the local community through theirs school, parish and various activities in which they participated.

“As a teenager, I felt very guilty for leaving my country behind,” she said, admitting, “Integration was challenging for me.”

Now Debbané, in her capacity at the Vatican’s Migrants and Refugees Section, assists the local Churches in the Middle East.

“Through the meticulous work of personal conversion and of transforming reality, I had to forgive and heal in order to fulfil my mission as Regional Coordinator. The human kindness I received then, played a major part in helping me heal and understand fraternity.”

“Because the future starts today and begins with each of us, I am grateful that providence has found a way for me to use my experience as a migrant to help build the future of other migrants and refugees, so that God’s plan for the world may be realised and His Kingdom of justice, fraternity, and peace may come.”

When asked by Vatican News how the Section is also reaching out to her native country of Lebanon which has seen a massive influx of refugees from Syria, and for which the Holy Father has made various appeals, she discussed how the Section’s efforts are greatly made by possible through collaborating with the local Churches and through important partners also on the ground, such as Caritas Internationalis and Caritas at their more local levels, Jesuit Refugee Services, among others.

If you look into their eyes, we are all the same

Cardinal Francesco Montenegro spoke next. His former diocese of Agrigento in Italy’s island of Sicily, whose jurisdiction extends to the island of Lampedusa, has received numerous refugees from Africa. The Cardinal welcomed Pope Francis to Lampedusa during his historic visit in 2013.

With firsthand experience, Cardinal Montenegro welcomed the Pope’s invitation to reflect on the link between the “dimension of eternal life towards which we are moving” and “the present,” full of wars, marginalisation, and inequalities. He deplored an “abysmal distance” between the two.

“The future of which the Pope speaks in his message is not a generic ‘tomorrow’ but is the certainty that belongs to the believer who knows he is walking towards eternity; just as the present cannot be framed in a confused set of facts that have nothing to do with God’s plan.”

“The Christian community has the responsibility to live today by seeking to realise God’s plan through justice, peace, and respect for the dignity of each person. In this way, as it walks through time in obedience to God’s will, it prepares the future – we might say – it anticipates eternity. This vision of salvation history imposes an inclusive logic.”

“There are not some who welcome and others who are welcomed but brothers who we must love each other, learning to make cultural, religious or social diversity a great opportunity for growth for all. My experience as Bishop of Agrigento allows me to confirm these principles that animate the message of Pope Francis.”

The Cardinal warned against categorizing or pre-judging these individuals.

“”If you can look into the eyes of that man, that woman or that child you understand that he is the same as you, that he is your brother. In that instant all distinctions, political diatribes, the logic of numbers or the regulations of this or that country fall away. Those eyes tell you the dignity of that person before and more than their belonging to country ‘X’ or religion ‘Y’. Building the future requires this gaze on the other free of all prejudice and privilege. The Pope insists a lot on the fact that this perspective can be an opportunity for growth for everyone. “”

The Pope, the Cardinal said, addresses this appeal to everyone and in particular to young people.

“Indeed,” he observed, “they are more ready to enter into this vision. So many associations, Catholic and non-Catholic, approach the migrant and refugee precisely with the spirit desired by Pope Francis. It comes naturally to young people to break down barriers. They feel the future as their home, and I believe we must trust their instincts more to build paths of integration among all the peoples of the earth.”

Cardinal Montenegro concluded by quoting a central part of the prayer that closes the Pope’s message: “Lord, make us builders of your Kingdom, together with migrants and refugees and with all who dwell on the peripheries.”