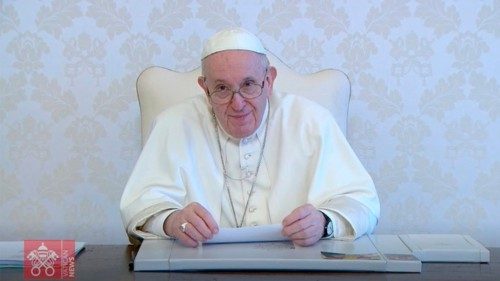 Pope Francis sends a video message to participants in the plenary assembly of the Pontifical Council for Culture, and calls for a renewed Christian humanism to help stem the fluidity of Western society.

As Pontifical Council for Culture kicks off its plenary assembly, Pope Francis sent a video message to participants on Tuesday, reflecting on the theme: “Necessary Humanism”.

The Pope began by noting how the assembly is being held in a virtual format, lamenting that the digital universe makes everything “incredibly close but without the warmth of presence.”

He said the pandemic has revealed the weaknesses of our social and economic model, including working methods, social life, and religious practices.

At the same time, the pandemic has rekindled people’s desire to face the fundamental questions of existence, such as the question about God and the human being.

The Pope said the Council’s chosen theme of humanism comes, therefore, at a crucial moment.

“At this juncture in history,” he noted, “we need not only new economic programmes or new formulas against the virus, but above all a new humanistic perspective, based on Biblical Revelation, enriched by the legacy of the classical tradition, as well as by the reflections on the human person present in different cultures.”Listen to our report

Pope Francis then recalled that St. Paul VI, in 1965, said the Church should respond to the threat of secular humanism by proposing the model of the Good Shepherd, who has “immense sympathy for the human being”, rather than merely condemning humanity and its desire to play God.

The Pope added that our own era is marked by the “end of ideologies” and by the “fluidity of contemporary cultural vision.” Another way to describe it, he said, is as “the age of liquidity or gaseousness.”

Yet, continued Pope Francis, the Church still has much to offer the world.

“It obliges us to acknowledge and evaluate, with confidence and courage, the intellectual, spiritual and material achievements that have emerged since [the Second Vatican Council] in various fields of human knowledge,” he said.

Pope Francis went on to note how a structural revolution is underway in human society, one which invites us to recall that the human person is a “servant of life and not its master.”

The Pontifical Council for Culture’s decision to focus its plenary assembly on humanism is therefore aimed at probing the questions of human existence and identity.

“What does it mean today to be man and woman as complementary persons called to be in relationship with one another? What do the words “fatherhood” and “motherhood’” mean? And then again, what is the specific condition of the human being, which makes him unique and unrepeatable compared to machines and even other animal species? What is his transcendent vocation? Where does his call to build social relationships with others come from?”

The Pope then recalled that the Church can draw on the richness found in the Biblical tradition for direction in humanity’s search for meaning.

“The Sacred Scripture offers us the essential coordinates to outline an anthropology of the human being in relation to God, in the complexity of the relations between man and woman, and in the nexus with the time and the space in which we live,” he said.

Biblical humanism, he added, combined with classical humanism from Greek and Latin thought, can become even more fruitful when informed by the values which various modern cultures can offer.

He gave the examples of the “holistic vision of Asian cultures”, “the solidarity of African cultures”, and the “anthropology of Latin American peoples.” These various cultural aspects can help “overcome the excessive individualism typical of Western culture.”

“In these different cultures,” said the Pope, “there are forms of a humanism which, integrated into the European humanism inherited from Greco-Roman civilisation and transformed by the Christian vision, is today the best means of addressing the disturbing questions about the future of humanity.”

Pope Francis concluded his video message to the plenary assembly of the Pontifical Council for Culture with an invitation to rediscover the value of the human being in relation to the challenges we face.