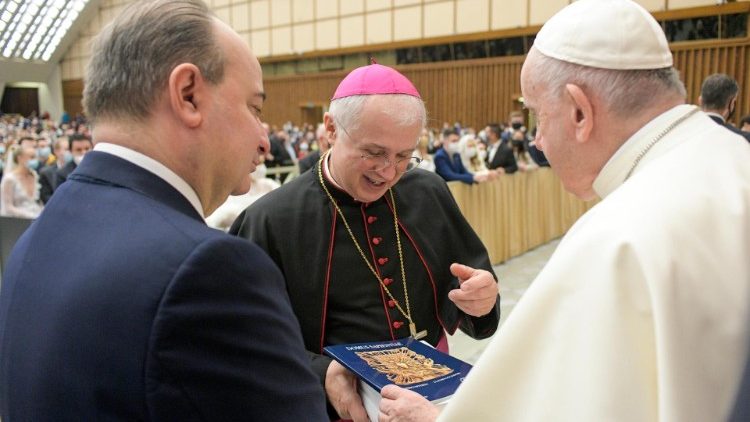 Pope Francis pens the preface to a book covering the history of the Italy-based Catholic University of the Sacred Heart, and highlights the importance of the Church’s work of education.

On the sidelines of the Wednesday General Audience, Pope Francis was presented with the first copy of the book by Bishop Claudio Giuliodori and the University’s Rector Franco Anelli.

Entitled “The Magisterium of the Church for the Catholic University of the Sacred Heart”, it gathers the teachings of the Popes and Italian bishops which were directed to the university founded by Fr. Agostino Gemelli in Rome on 7 December 1921.

In his preface, the Pope said the university’s centenary celebrations offer the possibility to appreciate the Church’s important work of education, which is renewed in each new generation.

“The amount and quality of the teachings show the relevance of the Church’s teaching mission, especially her dedication for advanced scientific and professional formation in all areas of knowledge and human efforts,” he wrote, calling it a type of education which “allows young people to let their talents bear fruit and offer their contribution to the common good.”

Pope Francis noted that the quantity of papal teaching directed toward the Rome-based university is surely influenced by the “complex relationship between the Church and Italian society after the unification of Italy.”

“The Catholic University of the Sacred Heart has been a true gymnasium for cultural exploration, Christian formation, and paths of holiness,” he said. “The history of the ‘Cattolica’ is a shining example of how efficacious and fruitful is the alliance between faith and science, theology and knowledge, and the spiritual and rational dimensions.”

The Pope went on to urge all Catholic universities to look to the future of the Church’s mission, which he said rests with academic institutions.

He said Catholic schools need to live that mission by promoting an experience of the kerygma, dialogue at all levels, interdisciplinary research, a culture of encounter, networking, and an understanding of the Church’s preferential option for the poor.

Hidden treasures of wisdom and knowledge

Pope Francis concluded his preface with an invitation for the institution to direct its gaze toward the Sacred Heart of Jesus, “in which are hidden all the treasures of wisdom and knowledge.”

“I encourage your academic institution to safeguard the memory of all the care with which the Church has given birth to it and of the rich teachings with which she has helped it grow, to confront the current challenges with renewed vigor.”