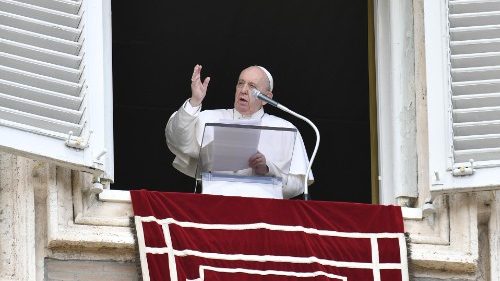 Pope at Angelus: Allow yourselves to be transformed

On the Solemnity of the Body and Blood of Christ, Corpus Christi, Pope Francis reflects on the mystical and communal effects of the Eucharist.

During his Sunday Angelus on the Solemnity of the Body and Blood of Christ, Pope Francis turned to the day’s reading, in which Saint Paul describes the Eucharistic celebration. “He highlights two effects of the shared chalice and the broken bread: the mystical effect and the communal effect”, said the Pope.

Pope Francis explained that Jesus is present in the sacrament of the Eucharist “to be our nourishment, to be assimilated and to become in us that renewing force that gives energy and the desire to set out again after every pause or fall”.

He added that this, however, requires “our assent, our willingness to let ourselves be transformed – our way of thinking and acting”. Otherwise, continued the Pope, the Eucharistic celebrations in which we participate “are reduced to empty and formal rites”.

Pope Francis continued saying the Lord knows that “our human strength alone is not enough for this” and that aware of the temptation to rivalry, envy, prejudice, division, “He left us the Sacrament of His real, tangible and permanent Presence, so that, remaining united to Him, we may always receive the gift of fraternal love”.

The Pope then explained that “this dual fruit of the Eucharist: first, union with Christ and second, communion between those who are nourished by Him”, generates and continually renews the Christian community. “It is the Church that makes the Eucharist”, he said, “but it is more fundamental that the Eucharist makes the Church”, continued the Pope, allowing her to “be her mission, even before she accomplishes it”.

Finally, the Pope prayed to the Blessed Virgin Mary, that she may “help us to always welcome with wonder and gratitude the great gift that Jesus gave us by leaving us the Sacrament of His Body and His Blood”.