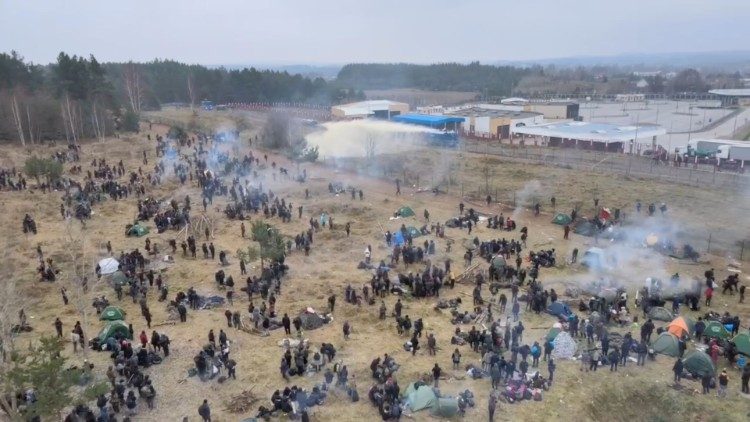 Polish forces have used tear gas and water against migrants fleeing war, persecution, and poverty to cross into the European Union nation from Belarus. The clashes came amid escalating border tensions with many people trapped in freezing temperatures.

Unprepared for the freezing weather, desperate migrants tried to storm into the European Union, mainly from the Middle East. They want to enter the EU nation Poland from autocratically ruled Belarus.

At the Belarusian-Polish frontier, some threw stones at Polish forces who responded with tear gas and water. Amid the clashes, at least one person was rushed on a stretcher to medical personnel. Women and children were crying amid clouds of tear gas, some soaked in water.

As temperatures drop, at least ten people are now known to have died in recent weeks, at least some of exhaustion and hypothermia.

Belarus has been accused of inviting and then pushing migrants to the Polish border in an attempt to destabilize and punish the EU over sanctions.

Minsk is furious about sanctions that Brussels introduced in response to a massive crackdown on dissent in Belarus. Thousands of protestors and other critics were detained, and police mistreated many after Belarus President Alexander Lukashenko claimed victory in a discredited vote last year.

However, Russia-backed Lukashenko has denied wrongdoing. He threatens to cut off natural gas supplies to Europe as winter sets in, saying the West seeks a military confrontation.

He said, “Russia already sent strategic bombers to Belarus, accompanied by our fighter planes. So we should permanently monitor the situation on the border. Yes, these are nuclear-capable bombers, but we have no other choice. Lukashenko added: “We are warming Europe, and they threaten us to shut the border after all. And what if we cut natural gas supplies?”

As the border crisis escalated, the EU and the United States suggested they would not be intimidated and increase sanctions in response to Belarus’ actions towards migrants.

But exiled Belarusian opposition leader Sviatlana Tsikhanouskaya expressed disappointment about the perceived slow actions against the Belarusian leaders. “The decisions are made rather slowly because of bureaucracy because maybe uncertainty,” she stressed.

“We are asking for more economic and political pressure on the regime. And the first rather serious sanctions were imposed only in 10 months after fraudulent elections in the country,” Tsikhanouskaya recalled.

“And the migration crisis, for example, didn’t start yesterday. It started five or four months ago. But a new round of sanctions is being discussed only now. So rather slow decisions,” the opposition leader complained.

However, as the standoff continues, advocacy activists and migrants have also accused Poland of human rights violations, such as pushing back those seeking asylum.

Polish authorities say they have no other choice saying migrants made more than 5,000 attempts to cross into Poland from Belarus this month alone.

That reportedly compares to just 88 in the whole of last year.

With tensions rising, Poland and other nations in the region continue to increase border security around the 27-nation EU.

Cardinal Czerny: inclusion of migrants is key for the future