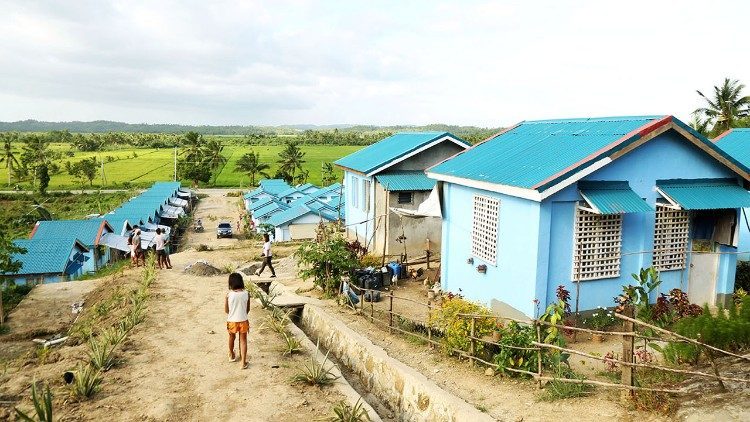 Share
Super Typhoon Yolanda is the most powerful typhoon to strike the Philippines in recorded history. It made landfall on 8 November 2013 in Guiuan, in the Philippine Province of Eastern Samar. It crashed into the Philippines with winds estimated at 305km/h (190m/h). A massive storm surge would later prove more destructive than Yolanda itself.

The storm’s strength was so massive, and the devastation so extensive that bodies were still being recovered two months later. In the Philippines alone, at least 6,300 people were killed. 1,800 others were declared missing. 1.1 million homes were damaged. 33 million coconut trees, an important part of the local economy, were destroyed. 4.1 million people were left without shelter in over 44 provinces.

A recovery program was set in motion in 2014. It encompassed shelter, water, sanitation and health, and the recovery of the ecosystem as well. After just 5 years, 300,000 homes have been built. That number does not include additional shelter provided by individual religious congregations and other Church-based organizations. 1.4 million Filipinos have been aided due to the coordination of efforts of various Caritas branches, including Catholic Relief Services, Caritas Switzerland, Caritas Italiana, Caritas Belgium, Caritas Germany, Caritas Austria, Development and Peace (D&P) and Cordaid.

Caritas Philippines held an event on Friday commemorating the typhoon’s fifth anniversary. At that event, Fr Edwin Gariguez, Executive Secretary for Caritas Philippines, said that in the wake of the devastation, Caritas Philippines was left feeling incapable of “implementing what would be the Church’s most massive, largest-funded and most comprehensive humanitarian response” effort in the Philippines. The outpouring of Caritas aid totaled about 61 million USD. This, Fr Gariguez said, bears witness to the universal Church’s dedication “to better the lives and restore the dignity” of Typhoon Yolanda’s survivors.

Fr Gariguez praised Caritas Internationalis who provided not only funding, but disaster response experts as well. “That is why we were able to accomplish so many things”, he said. After initially being overwhelmed, Fr Gariguez said that Caritas Philippines is “very proud of this accomplishment, yet humbled by the experience”.

Pope shifts World Day of Migrants and Refugees to September